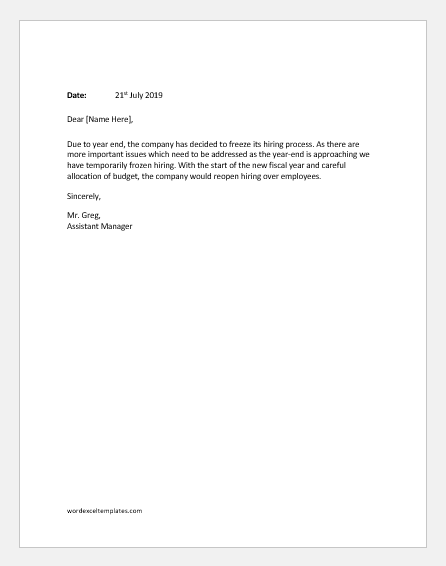 The companies often face challenges of financial instabilities, industry issues, economic recessions or slowing down of economic activities. In such scenarios, the companies try to minimize and manage their costs effectively and usually the first step involves cutting additional payroll costs by announcing a hiring freeze.

A hiring freeze refers to a company putting a pause on its hiring-related activities. It can be for a short or a long-term basis depending on the financial situation of the company as well as the external factors related to the industry and the economy.

Companies have HR departments that are directly related to hiring employees. However, sometimes, the companies hire recruiting agencies as well to perform this task for them or to help them with it. Therefore, when the management of the company has decided to freeze their hiring for short or long-run, they inform the concerned employees and/or the recruiting agencies through a formal letter.

The general format of the letter is as follows:

The hiring freeze may help a company in a short run but if the company requires additional staff and its operations are getting affected due to limited employees, hiring freeze might prove to be detrimental rather than beneficial. In addition, If the hiring freeze does not serve the required purpose, the company may start taking the next step of firing the employees to reduce their HR costs in order to sustain in financial difficulties.

Due to current economic conditions being unfavorable for our business activities we are facing a budget deficit this fiscal year. Due to the low budget, the company has decided to freeze its hiring. We hope to cope with this current market condition in a few months’ time and then resume hiring of employees.

Due to year end, the company has decided to freeze its hiring process. As there are more important issues which need to be addressed as the year-end is approaching we have temporarily frozen hiring. With the start of the new fiscal year and careful allocation of budget, the company would reopen hiring over employees.

New projects acquisition is an effective way of making profits but this year due to lack of projects the company is going through turmoil. Less income has been generated due to which the company has duly decided to hire its freezing process.

As soon as the working conditions get better we will once again reopen hiring’s over employees. 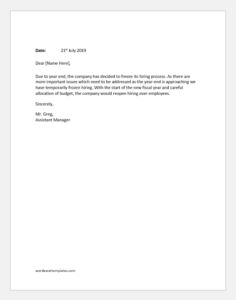 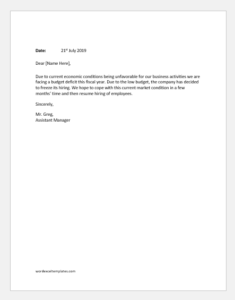 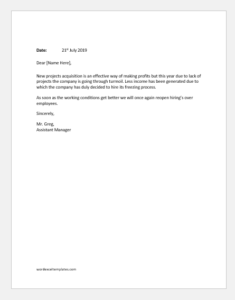