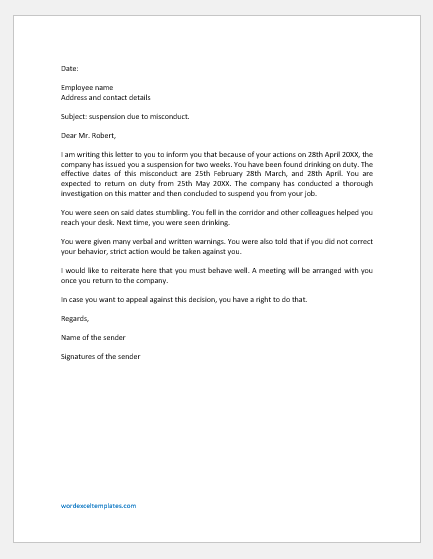 What is a suspension letter?

When to write the suspension letter?

Different situations that necessitate the use of suspension letter are:

What are the benefits of the suspension letter?

Some people think that writing a suspension letter when someone commits misconduct is useless since the guilty person returns to work and does not show any kind of behavior change. However, this is not the case. Let us discuss a few benefits:

They help in behaviour management:

Managing the behavior of employees in a business is better than terminating them from the job. When a person is suspended from his job, he feels embarrassed. Therefore, it is more likely that he will return to the job with improved behavior to prevent this from happening again. Furthermore, the employee knows that the next step of the company will be to terminate him. So, it becomes necessary for him to correct himself.

When a company takes strict actions against one employee, all other employees feel that the company is firm in its policies, and therefore, they also need to be wary of their actions.

There is a sample letter of suspension of an employee who was seen showing misconduct at the workplace. This sample letter will help you write an effective letter that looks like a professional piece of writing.

Sample suspension letter due to misconduct:

Subject: suspension due to misconduct.

I am writing this letter to you to inform you that as a result of your actions on 28th April 20XX, the company has issued you a suspension for two weeks. You have been found drinking on duty. The effective dates of this misconduct are 25th February, 28th March, and 28th April. You are expected to return on duty from 25th May 20XX. The company has conducted a thorough investigation on this matter and then concluded to suspend you from your job.

You were seen on said dates stumbling. You fell in the corridor and other colleagues helped you reach your desk. Next time, you were seen drinking.

You were given many verbal and written warnings. You were also told that if you did not correct your behavior, strict action would be taken against you.

I would like to reiterate here that you must behave well. A meeting will be arranged with you once you return to the company.

In case you want to appeal against this decision, you have a right to do that.

Name of the sender