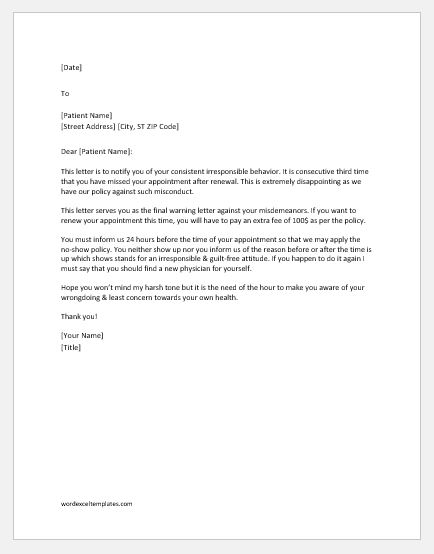 A patient has to take an appointment for meeting the doctor. When the doctor gives appointment time to the patient, he makes himself available for him. The doctor’s time gets wasted completely when the patient does not show up. It is the responsibility of the patient to show up himself when he takes time from the doctor.

When the patient does not show himself up to meet the doctor, he causes great inconvenience for the doctor. In such a situation, the doctor can issue the warning letter to the patient. In this letter, the doctor tells the patient that his absence has bothered him and other patients waiting for their turn.

The doctor can tell the patient about the possible consequences if the patient does not show up again ever in the future at a specified time.

How to write the letter?

The warning letter is written in order to emphasis on the seriousness of the matter. Every hospital has a specific policy to follow. The patients coming for a check-up or for any other reason are required to abide by the rules of the hospital. It is the responsibility of the patient to be on time when he has an appointment with the doctor.

Most of the doctors don’t have time to write the warning letter from scratch. For such people, warning letter to the patient for no show-up template is available. This template allows the users to edit it according to their needs and then send it to their patients. 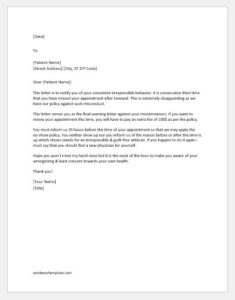 This letter is to notify you of your consistent irresponsible behavior. It is consecutive third time that you have missed your appointment after renewal. This is extremely disappointing as we have our policy against such misconduct.

This letter serves you as the final warning letter against your misdemeanors. If you want to renew your appointment this time, you will have to pay an extra fee of 100$ as per the policy.

You must inform us 24 hours before the time of your appointment so that we may apply the no-show policy. You neither show up nor you inform us of the reason before or after the time is up which shows stands for an irresponsible & guilt-free attitude. If you happen to do it again I must say that you should find a new physician for yourself.

Hope you won’t mind my harsh tone but it is the need of the hour to make you aware of your wrongdoing & least concern towards your own health.