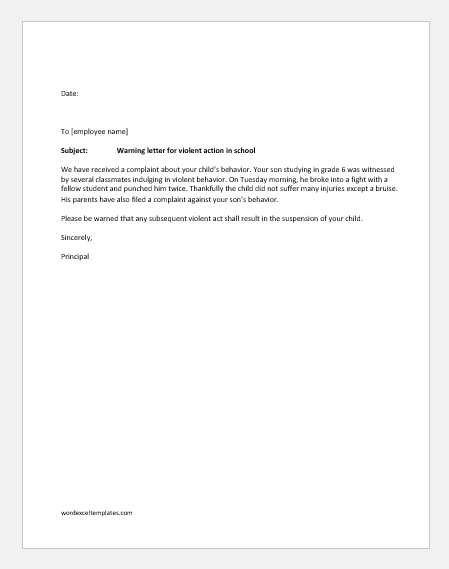 Offices and schools are public areas where one must exhibit formal behavior. Every organization has a set of internal values that employees are expected to learn and exhibit. One of the most critical values is tolerance of others. Similarly, schools are learning places where students are expected to groom themselves and learn to positively interact with other students.

In both schools and offices, the violence of any form is prohibited. It is a strictly punishable offense. There is a long list of actions that are considered violent. These actions include:

Basically, any intentional use of force or power to threaten or harm another person is considered a violent act. Violence is a public offense punishable by law. Therefore, it must be avoided at all costs. Here you can find sample letters to use as warning letters for violent actions in office and school.

We have received a complaint about your behavior. On Friday [enter date], you entered a heated argument with a colleague and threw a chair at him. Your behavior was observed by several employees at the office including the HR Assistant. This is a serious offense.

We have received a complaint about your child’s behavior. Your son [NAME] studying in grade 6 was witnessed by several classmates indulging in violent behavior. On Tuesday morning, he broke into a fight with a fellow student and punched him twice. Thankfully the child did not suffer many injuries except a bruise. His parents have also filed a complaint against your son’s behavior.

Please be warned that any subsequent violent act shall result in the suspension of your child.