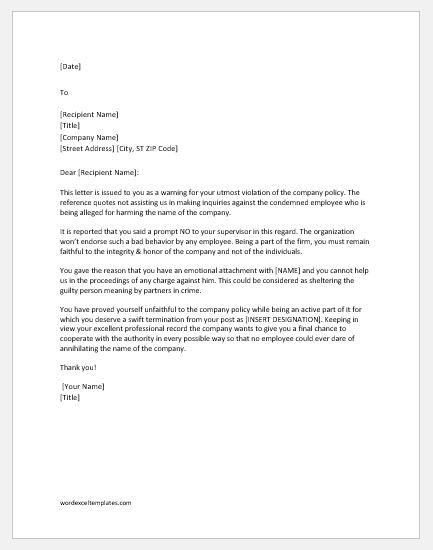 Failure to follow all the respective rules and regulations lead to warnings at a workplace. In such cases, a formal warning letter is issued respectively.

Once an employee is found to refuse for cooperation with an official inquiry, a formal warning is being issued. This warning can be issued in several refusal cases. These cases can be:

Hence, in all these cases this letter can be used. The organization’s norms, rules, and policies are important for the overall reputation, growth, and achievement of desired goals and objectives. Once, a contract is signed by an employee; he is obliged to follow all the rules and regulations strictly.

Such letters need to be concerning, concise and to-the-point. In such letters, further details are provided upon request. The mandatory part of such letter is a formal tone so that it should be taken as a serious note.

A general sample letter is attached as follows. 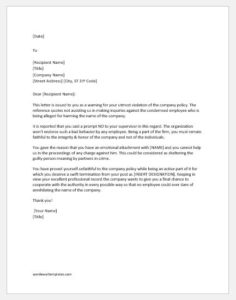 This letter is issued to you as a warning for your utmost violation of the company policy. The reference quotes not assisting us in making inquiries against the condemned employee who is being alleged for harming the name of the company.

It is reported that you said a prompt NO to your supervisor in this regard. The organization won’t endorse such a bad behavior by any employee. Being a part of the firm, you must remain faithful to the integrity & honor of the company and not of the individuals.

You gave the reason that you have an emotional attachment with [NAME] and you cannot help us in the proceedings of any charge against him. This could be considered as sheltering the guilty person meaning by partners in crime.

You have proved yourself unfaithful to the company policy while being an active part of it for which you deserve a swift termination from your post as [INSERT DESIGNATION]. Keeping in view your excellent professional record the company wants to give you a final chance to cooperate with the authority in every possible way so that no employee could ever dare of annihilating the name of the company.