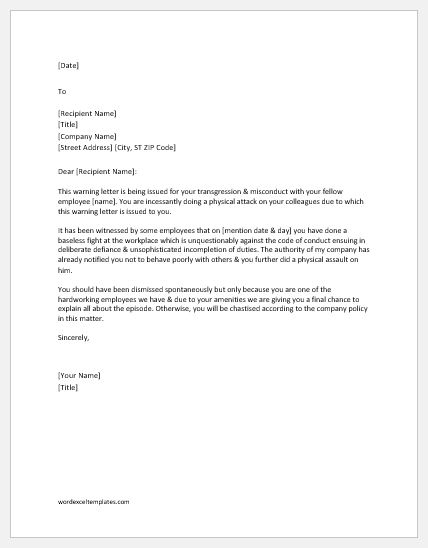 Proud and rude behavior always keeps one in trouble. The conscience of a rude person always pinches him/her about his misbehavior. Such individuals never have peace of mind. Respectively, a workplace requires its employees to have much patience, hard work and time for survival. By this way, they can be successful and attain all that they want.

A person with good behavior and manners is always free from worries and troubles at the workplace. He is admired by all the members of the organization. Likewise, physical abuse in the workplace is a matter of serious concern. If a physical confrontation is seen at the workplace, a very serious warning letter is issued to the respective employee.

A warning letter for physical confrontation can be issued in any of the following cases:

All these cases, lead to a formal warning letter issued to the employee who is found at guilt. The letter contains references to the physical confrontation occurred. It also contains the references to the signed contract by the employee at the time of joining. The letter contains the details of the serious actions that will be taken according to the context of laws and policies.

A template warning is attached here. 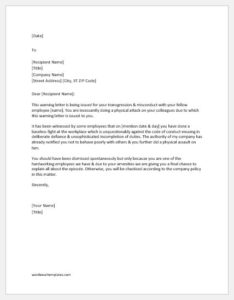 It has been witnessed by some employees that on [mention date & day] you have done a baseless fight at the workplace which is unquestionably against the code of conduct ensuing in deliberate defiance & unsophisticated incompletion of duties. The authority of my company has already notified you not to behave poorly with others & you further did a physical assault on him.

You should have been dismissed spontaneously but only because you are one of the hardworking employees we have & due to your amenities we are giving you a final chance to explain all about the episode. Otherwise, you will be chastised according to the company policy in this matter. 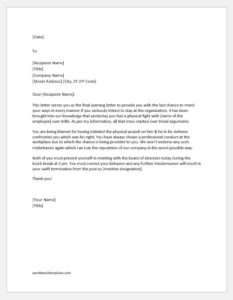 This letter serves you as the final warning letter to provide you with the last chance to mend your ways in every manner if you seriously intend to stay at the organization. It has been brought into our knowledge that yesterday you had a physical fight with [name of the employee] over trifle. As per my information, all that mess started over trivial arguments.

You are being blamed for having initiated the physical assault on him & he in his defense confronted you which was his right. You have always shown a professional conduct at the workplace due to which the chance is being provided to you. We won’t endorse any such misbehavior again which can ruin the reputation of our company in the worst possible way.

Both of you must present yourself in meeting with the board of directors today during the lunch break at 2 pm. You must correct your behavior and any further misdemeanor will result in your swift termination from the post as [mention designation].