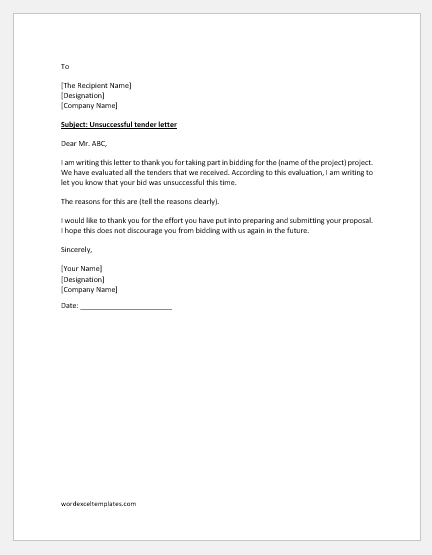 A company often gets bids or quotations from tenders when it comes to buying different products. Some of these will be accepted and successful whilst others will be unsuccessful and rejected. The business needs to behave professionally and courteously when rejecting bids. You need to tell your reasons for why you have rejected the tender. The bidder did take out time to make a tailored response to the request for a quote, therefore letting them know why it was unsuccessful could aid them when it comes to any future bids.

It is tough for the company to reject the tender but one way to do this is with a letter. It seems like a non-confrontational way of responding to the company. When writing the letter, make sure that its tone is courteous.

You must tell the reasons why the tender was unsuccessful. You want to have a good relationship with the tender so that they will want to do business with you in the future. Therefore, you should respond to them carefully.

Avoid mistakes as when there are mistakes, the letter looks like it was carelessly written. The tender will think that you do not take them seriously with a letter like this. The tone you use must be courteous as well.

Reply to an unsuccessful tender letter…

When you need to write a reply to an unsuccessful tender letter, you should make sure that the receiver knows that you take them seriously and value their time and effort. The following points can be considered when writing the letter:

You should start by thanking the company for its bid or proposal. It is a good idea to state the date of the bid and the project name so that the tender can know which one was unsuccessful. You must even complement the tender for the proposal that they have submitted. If there is anything positive that you can say about the company, say it.

You need to reject the bid politely and tell the reasons for doing this. The reason may be that another tender was presenting you with a better opportunity cost-wise. If there was a problem with the bid, let the contractor know so that they can avoid doing this mistake later.

Hope for the future:

End the letter by saying that you want to work in the future with the tender and that they should not be hesitant for submitting bids later. The letter needs a proper closing like “Sincerely” and you can sign it.

I am writing this letter to thank you for taking part in bidding for the (name of the project) project. We have evaluated all the tenders that we received. According to this evaluation, I am writing to let you know that your bid was unsuccessful this time.

The reasons for this are (tell the reasons clearly).

I would like to thank you for the effort you have put into preparing and submitting your proposal. I hope this does not discourage you from bidding with us again in the future.

Thank you for your interest in giving a quote for our (name project) on (state date).

We are aware that much effort and time was put on your part to prepare the contract, but we regret to tell you that it was unsuccessful. We have decided to accept the proposal of another tender.

The reasons for this are:

Thank you for submitting a bid and we hope to work with you on any future projects.