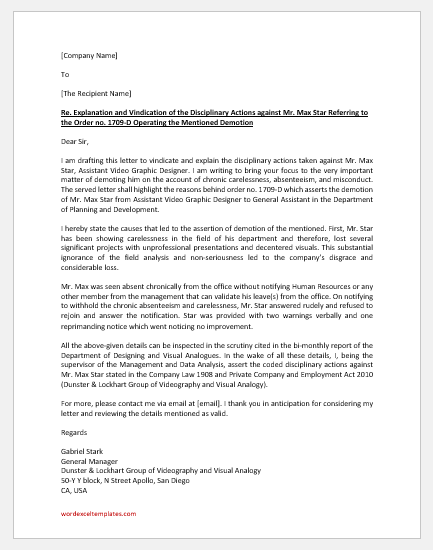 Re. Explaining and Justifying the Confiscation of Disciplinary Actions against Mrs. Emilia Lawrence w.r.t Order No. 34A-90 Commencing Immediate Termination

I am Stewart Hill from the Department of Human Resource Management. I am drafting this letter to explain the reasons behind the commencement of immediate termination of Mrs. Emilia Lawrence with reference to order no. 34A-90. I pleaded and directed for your termination on the grounds of breach of entrusted confidentiality as a project manager. The impeachment of the Lex Records Annihilation Code and misconduct with the inquiry team also added to the causes of such stern and strict disciplinary actions.

It has been observed and reported to Human Resources that Mrs. Lawrence had been receiving a fair share from Mega Folk Advertisers and CO. in return for sharing confidential information of the latest projects and advertising campaigns.

Moreover, she has also been sharing new ideas for advertising campaigns for several projects from the past. Therefore, it has been felt necessary to confiscate coded disciplinary measures against the committed charge.

I hereby refer to the Federal and State Law of Company 1999 and [X] Company’s Employment Privacy Policy (updated on 23rd January 20XX) that imply the aforementioned terms and conditions. The said laws and policy clearly state that there is no room for such offenses and no compensation in this regard.

The committed offense is itself immoral and illegal in its entirety. The gravity of the offense keeps no space for compensation, compromise, and accommodation.

Having all this said, I plea to take strict disciplinary actions against Mrs. Lawrence with reference to the justifications mentioned above. This offense is exponentially undesirable and impermissible.

Please write to me for any further at [email]. I thank you in anticipation for considering my explanation for disciplinary actions against Mrs. Emilia Lawrence. 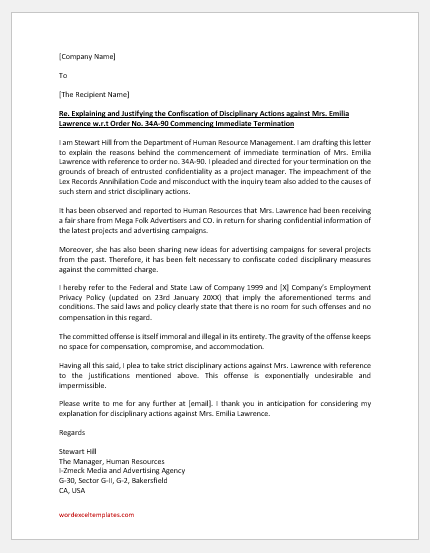 Re. Explanation and Vindication of the Disciplinary Actions against Mr. Max Star Referring to the Order no. 1709-D Operating the Mentioned Demotion

I am drafting this letter to vindicate and explain the disciplinary actions taken against Mr. Max Star, Assistant Video Graphic Designer. I am writing to bring your focus to the very important matter of demoting him on the account of chronic carelessness, absenteeism, and misconduct. The served letter shall highlight the reasons behind order no. 1709-D which asserts the demotion of Mr. Max Star from Assistant Video Graphic Designer to General Assistant in the Department of Planning and Development.

I hereby state the causes that led to the assertion of demotion of the mentioned. First, Mr. Star has been showing carelessness in the field of his department and therefore, lost several significant projects with unprofessional presentations and decentered visuals. This substantial ignorance of the field analysis and non-seriousness led to the company’s disgrace and considerable loss.

Mr. Max was seen absent chronically from the office without notifying Human Resources or any other member from the management that can validate his leave(s) from the office. On notifying to withhold the chronic absenteeism and carelessness, Mr. Star answered rudely and refused to rejoin and answer the notification. Star was provided with two warnings verbally and one reprimanding notice which went noticing no improvement.

All the above-given details can be inspected in the scrutiny cited in the bi-monthly report of the Department of Designing and Visual Analogues. In the wake of all these details, I, being the supervisor of the Management and Data Analysis, assert the coded disciplinary actions against Mr. Max Star stated in the Company Law 1908 and Private Company and Employment Act 2010 (Dunster & Lockhart Group of Videography and Visual Analogy).

For more, please contact me via email at [email]. I thank you in anticipation for considering my letter and reviewing the details mentioned as valid.