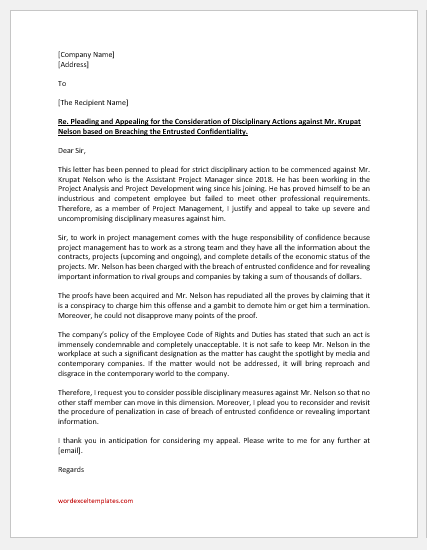 Re. Appealing for the Standard Disciplinary Actions to be Commenced on the Grounds of Company’s Employees’ Conduct Policy 2011

I am Daniel Swan from the Department of Web Designing and Development. I have been working here since 2015 as a Web Developer. I have always been a hardworking and competent employee and have assisted in winning many projects during my tenure. The ambiance of the workplace has been very pleasant and immensely professional. I have enjoyed working here and learned a lot of new skills and acquired new knowledge in the field of web development. I am writing an appeal letter to you to take strict disciplinary actions against Mr. Lowman.

On 23rd January 20XX, Mrs. Jennifer Nelson reported that she was harassed by the mentioned person several times and is not abstaining from the misdemeanor even after warned by the sufferer. She warned him that she will complain about this to the management as workplace harassment is a serious offense.

Lowman did not pay heed to her warnings and kept on harassing her in each possible way. At last Mrs. Nelson reported this to her supervisor who furnished Lowman with a reprimand notice which did not meet any improvement in his conduct.

I got into an argument with Lowman on 10-02-20XX while talking about the web designs and their approvals. As Lowman works in Project Management, therefore, it is unavoidable to communicate with him when it comes to the workplace stuff. As a result of that argument Lowman started abusing me and then I pushed him. He punched me into my face and it started bleeding. CCTV footage can be examined as convincing evidence.

Having all this said, I plea you to take strict disciplinary actions against Mr. Lowman so that no other member of the company can do the same. Federal and State Government Laws of Public and Private Companies of 2009 states that no employee can be accommodated with such code of conduct. They include salary deduction, demotion, reduction in perks and privileges, or termination depending on the gravity of the matter.

Please contact for more details on +[X] or write on [email].

Re. Pleading and Appealing for the Consideration of Disciplinary Actions against Mr. Krupat Nelson based on Breaching the Entrusted Confidentiality.

This letter has been penned to plead for strict disciplinary action to be commenced against Mr. Krupat Nelson who is the Assistant Project Manager since 2018. He has been working in the Project Analysis and Project Development wing since his joining. He has proved himself to be an industrious and competent employee but failed to meet other professional requirements. Therefore, as a member of Project Management, I justify and appeal to take up severe and uncompromising disciplinary measures against him.

Sir, to work in project management comes with the huge responsibility of confidence because project management has to work as a strong team and they have all the information about the contracts, projects (upcoming and ongoing), and complete details of the economic status of the projects. Mr. Nelson has been charged with the breach of entrusted confidence and for revealing important information to rival groups and companies by taking a sum of thousands of dollars.

The proofs have been acquired and Mr. Nelson has repudiated all the proves by claiming that it is a conspiracy to charge him this offense and a gambit to demote him or get him a termination. Moreover, he could not disapprove many points of the proof.

The company’s policy of the Employee Code of Rights and Duties has stated that such an act is immensely condemnable and completely unacceptable. It is not safe to keep Mr. Nelson in the workplace at such a significant designation as the matter has caught the spotlight by media and contemporary companies. If the matter would not be addressed, it will bring reproach and disgrace in the contemporary world to the company.

Therefore, I request you to consider possible disciplinary measures against Mr. Nelson so that no other staff member can move in this dimension. Moreover, I plead you to reconsider and revisit the procedure of penalization in case of breach of entrusted confidence or revealing important information.

I thank you in anticipation for considering my appeal. Please write to me for any further at [email].