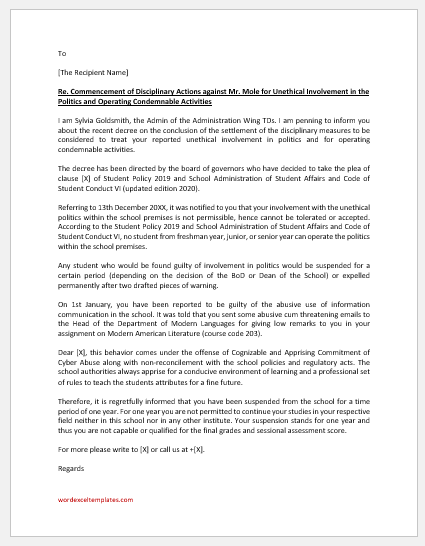 Re. Proclamation of Disciplinary Actions against Mr. Jim Stewart from the Semester V of Under-graduation Program of Business School of California with Registration No.459BSC2020

It is to notify you that you have been unable to reach the demanded stipulation and the objective set for you in the previous reprimand letter. This letter has been drafted with the sole concern of informing and proclaiming strict disciplinary measures against you on the grounds of a misdemeanor in the class and deficient and miserable results.

First, you have been misconducting in the class of Basic Principles of Auditing and Accounts with Mrs. Emily Cooper who is your supervisor in writing the term paper of the Fundamental Auditing and Their Solutions.

Secondly, you could not meet the minimum requirement of the research CGPA and QP (Quality Policy) required for further enrolment. On the account of mentioned reasons, the Dean of the Management Sciences along with the reverend opinion of your supervisor has decided to take up strict disciplinary measures against you.

As you were already furnished with University Reprimand Fellowship Form and a verbal exhortation partially reprimanding the unprofessional attitude highlighting the objectionable codes of conduct, now this letter serves as a disciplinary action notice.

Presently pronounced disciplinary actions are the loss of the right to distinction even if rightfully earned on merit, loss of the right to get admission in any further program in the future, getting a deduction of 10% in the final result while suspending the issuance of transcript for a period of six months. You can refer to the legal advisor of the university in the Department of Student Affairs and Program Suspension for any kind of legal assistance.

Write to [X] or call at +[X] for further. Please find the entire evidence report and complaint letter enclosed. 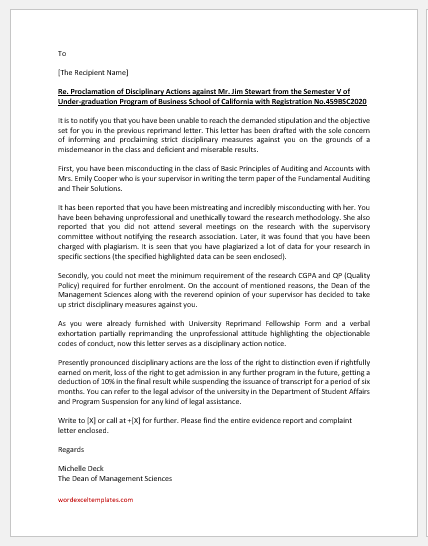 Re. Commencement of Disciplinary Actions against Mr. Mole for Unethical Involvement in the Politics and Operating Condemnable Activities

I am Sylvia Goldsmith, the Admin of the Administration Wing TDs. I am penning to inform you about the recent decree on the conclusion of the settlement of the disciplinary measures to be considered to treat your reported unethical involvement in politics and for operating condemnable activities.

The decree has been directed by the board of governors who have decided to take the plea of clause [X] of Student Policy 2019 and School Administration of Student Affairs and Code of Student Conduct VI (updated edition 2020).

Referring to 13th December 20XX, it was notified to you that your involvement with the unethical politics within the school premises is not permissible, hence cannot be tolerated or accepted. According to the Student Policy 2019 and School Administration of Student Affairs and Code of Student Conduct VI, no student from freshman year, junior, or senior year is allowed to operate the politics within the school premises.

Any student who would be found guilty of involvement in politics would be suspended for a certain period (depending on the decision of the BoD or Dean of the School) or expelled permanently after two drafted pieces of warning.

Dear [X], this behavior comes under the offense of Cognizable and Apprising Commitment of Cyber Abuse along with non-reconcilement with the school policies and regulatory acts. The school authorities always apprise for a conducive environment of learning and a professional set of rules to teach the students attributes for a fine future.

Therefore, it is regretfully informed that you have been suspended from the school for a time period of one year. For one year you are not permitted to continue your studies in your respective field neither in this school nor in any other institute. Your suspension stands for one year and thus you are not capable or qualified for the final grades and sessional assessment score.