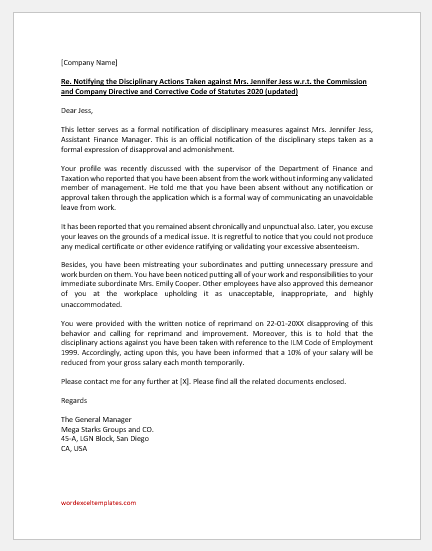 Re. Issuing an Edict for the Disciplinary Measures against Mr. Cole Nelson for Chronic Absenteeism and Misconduct with the Immediate Supervisor/Project Director/Manager Underpinning the Order No. 901-B

Moreover, it is warned that more disciplinary measures can be taken if no improvement is seen in the mentioned concerns. This letter has been penned to you to deliberately assist you in communicating and knowing the actions taken up from the relevant provisions.

It was reported on 20th December 20XX that you have been careless and non-serious with the responsibilities meted out to you with the designation of Project Manager (according to the promotion letter 12th November 20XX). Then it was also observed that you started arriving and leaving the workplace on your own will paying no heed to the official timings and observance of regulations.

Moreover, when you were warned about your excessive absenteeism, your misdemeanor was witnessed by many. Such departmental affairs are only controllable when they are settled internally. It was also reported with evidence that you made the video of the quarrel between you and the Web Developer Mr. Nick Fisher and uploaded it on your Facebook profile. Such an unprofessional attitude and misdemeanor are not acceptable in any case.

According to the coded policies and law, you have been informed that you have lost all the perks and privileges coming up with your designation. They include the right to specific items listed and their utility in your hands. The loss of privileges is valid till 23rd April 20XX until the submission of improvement in the bimonthly report centering on your profile.

For more, you are encouraged to contact Human Resources. Please write to fulfill any query to [X] or call +[X]. 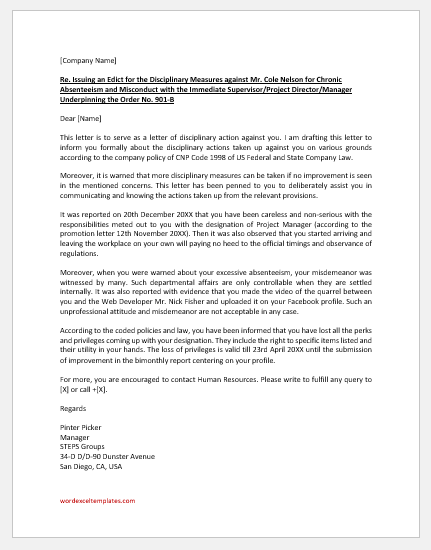 Re. Notifying the Disciplinary Actions Taken against Mrs. Jennifer Jess w.r.t. the Commission and Company Directive and Corrective Code of Statutes 2020 (updated)

Your profile was recently discussed with the supervisor of the Department of Finance and Taxation who reported that you have been absent from the work without informing any validated member of management. He told me that you have been absent without any notification or approval taken through the application which is a formal way of communicating an unavoidable leave from work.

It has been reported that you remained absent chronically and unpunctual also. Later, you excuse your leaves on the grounds of a medical issue. It is regretful to notice that you could not produce any medical certificate or other evidence ratifying or validating your excessive absenteeism.

Besides, you have been mistreating your subordinates and putting unnecessary pressure and work burden on them. You have been noticed putting all of your work and responsibilities to your immediate subordinate Mrs. Emily Cooper. Other employees have also approved this demeanor of you at the workplace upholding it as unacceptable, inappropriate, and highly unaccommodated.

You were provided with the written notice of reprimand on 22-01-20XX disapproving of this behavior and calling for reprimand and improvement. Moreover, this is to hold that the disciplinary actions against you have been taken with reference to the ILM Code of Employment 1999. Accordingly, acting upon this, you have been informed that a 10% of your salary will be reduced from your gross salary each month temporarily.

Please contact me for any further at [X]. Please find all the related documents enclosed.