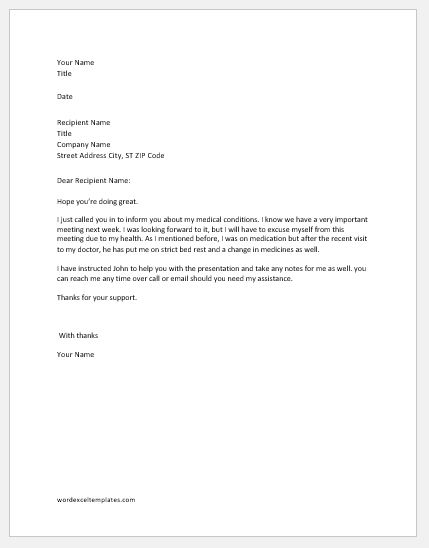 The main purpose of writing this explanation letter is to make the other party understand the reason for not attending the meeting and it also encourages the other party to forgive you for not participating so that they can continue a good relationship with you and can move forward.

What are the tips for writing explanation letter?

I just called you in to inform you about my medical conditions. I know we have a very important meeting next week. I was looking forward to it, but I will have to excuse myself from this meeting due to my health. As I mentioned before, I was on medication but after the recent visit to my doctor, he has put me on strict bed rest and a change in medicines as well.

I have instructed John to help you with the presentation and take any notes for me as well. you can reach me any time over call or email should you need my assistance.

Thanks for your support.

Preview and Details of the Letter