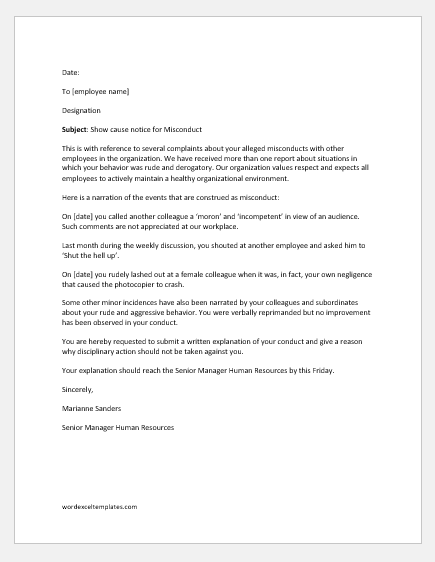 Show-cause letters may be written for different situations including misconduct, insubordination, illegal activities, negligence, irresponsible behavior, physical abuse or harassment, and many other reasons.

A show cause letter for misconduct is written to an employee when the employee is observed to have repeatedly exhibited poor behavior towards the supervisor, colleagues or subordinates.

Misconduct generally includes inappropriate behavior, aggressive or racial behavior, behaving rudely, shouting or abusing another employee of the organization, and any other behavior that negatively affects the organizational culture and employee relations.

Usually, a show cause letter is issued after several similar instances are reported to the human resources department or the employee’s supervisor. The first step to tackle misconduct is usually verbal reprimands by the supervisor.

The employee is given a fair chance to explain their behavior and the reasons for misbehaving. If the reasons are significant, the organization may take a different path. However, if the employee fails to provide unsatisfactory answers, then the employer may take any decision it believes to be appropriate in the situation. The employee is communicated that his/her explanation was not found to be satisfactory.

Subject: Show cause notice for Misconduct

This is with reference to several complaints about your alleged misconducts with other employees in the organization. We have received more than one report about situations in which your behavior was rude and derogatory. Our organization values respect and expects all employees to actively maintain a healthy organizational environment.

Here is a narration of the events that are construed as misconduct:

On [date] you called another colleague a ‘moron’ and ‘incompetent’ in view of an audience. Such comments are not appreciated at our workplace.

Last month during the weekly discussion, you shouted at another employee and asked him to ‘Shut the hell up’.

On [date] you rudely lashed out at a female colleague when it was, in fact, your own negligence that caused the photocopier to crash.

Some other minor incidences have also been narrated by your colleagues and subordinates about your rude and aggressive behavior. You were verbally reprimanded but no improvement has been observed in your conduct.

You are hereby requested to submit a written explanation of your conduct and give a reason why disciplinary action should not be taken against you.

Your explanation should reach the Senior Manager Human Resources by this Friday.