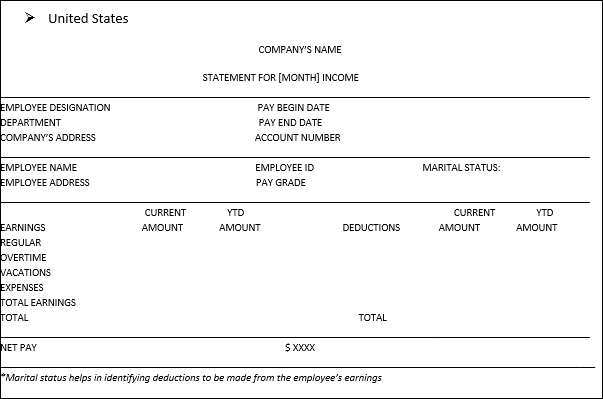 A salary slip, also known as a payslip or paystub, is an official document issued by an employer, finance, or payroll officials, to an employee for providing details of a salary breakdown. It contains complete information on the employee’s earnings and deductions for a particular month. The employer is obliged to issue a payslip to all of the employees, either in a printed or online form.

A salary slip could be helpful in many ways. Below are mentioned few points which refer to the importance of a salary slip:

Thus, for an employee, it is important to have a salary slip as it can help him/her for any of the above-mentioned reasons. The employee should maintain a record of all of the provided salary slips, to use them later when the need arises.

Providing a salary slip is mandatory…

It is a right of an employee to be provided with a salary slip, and employers, in many countries, are legally bound by the law for issuing a salary slip to all of the employees, as evident from the Fair Work Act 2009, Section 536, which states an obligation on employers to issue payslips to the workers or employees.

A similar law exists in the United Kingdom as the Payment of Wages Act 1991, which grants a right of attaining or receiving payslips to all employees and workers, likewise the right to payslip in India is addressed under Minimum Wages Rules.

Format of the slip…

The format and components of a salary slip can vary for different countries. But the basic important components of the slip remain the same, which include:

The salary slip may also contain the Employee’s ID, No. of working hours/days, and details of the Bank’s branch and account. Below is given an overview of different formats of salary slips for different countries:

There are different tools that can be used to generate a salary slip of an employee other than MS Word. Though multiple online software is available to ease the process, Microsoft Excel is readily available and is convenient to use. However, one requires practice for the effective utilization of MS Excel. Below are formats that can be used for Excel payslips, and can be customized as per requirements:

The pay slip in MS Excel can be generated or created by two means:

MS Excel provides the user with an inventory of templates that can be used by the finance department to create salary slips for the employee. Below are mentioned few steps which are used to create a template on MS Excel:

In order to create a template manually, one needs to have MS Excel. Once the file is there, open the excel sheet and then follow the below-mentioned steps to create the simplest template: