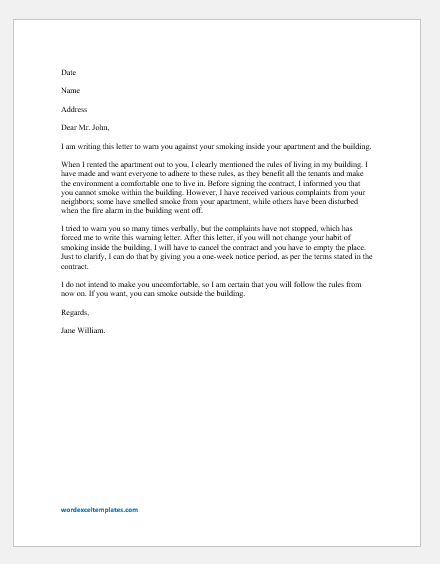 A no-smoking warning letter to the tenant is a formal letter written by the owner of the house or apartment and is addressed to the tenant who is living in the rented place to warn him against smoking. This document can be legal support in case the owner wants to cancel the contract and ask the tenant to leave the place.

There is certain decorum of living in a place that has close neighborhoods. The rules, often stated in the contracts, are made to make a good environment for everyone. If the tenants do not adhere to the rules, the neighbors might get disturbed and compliant against him, resulting in the tenant losing his rented place.

One such rule is the prohibition of smoking inside the home or building. Smoking causes many issues, not just in terms of passive smoking, but also, in terms of smell, smoke, fire alarms, ruining of paint and darkening of walls, etc. To control all of this, the owner clarifies it to the tenant regarding that and the possible consequences, if the rule would not be followed.

This letter can have varying details stated in it, but, generally, the following information is included:

I am writing this letter to warn you against your smoking inside your apartment and the building.

When I rented the apartment out to you, I clearly mentioned the rules of living in my building. I have made and want everyone to adhere to these rules, as they benefit all the tenants and make the environment a comfortable one to live in. Before signing the contract, I informed you that you cannot smoke within the building. However, I have received various complaints from your neighbors; some have smelled smoke from your apartment, while others have been disturbed when the fire alarm in the building went off.

I tried to warn you so many times verbally, but the complaints have not stopped, which has forced me to write this warning letter. After this letter, if you will not change your habit of smoking inside the building, I will have to cancel the contract and you have to empty the place. Just to clarify, I can do that by giving you a one-week notice period, as per the terms stated in the contract.

I do not intend to make you uncomfortable, so I am certain that you will follow the rules from now on. If you want, you can smoke outside the building.