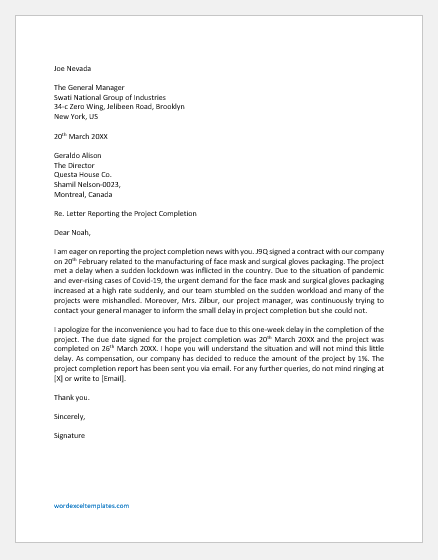 Project completion letter writing can multiply benefits to your company;

Following are given two sample letters:

I am writing on behalf of Swati National Group of industries with which your reverend Managing Director signed a project of making a considerable amount of Textile Most. The project was contracted on 20th January 20XX and the due date for the completion of the project was 30th March 20XX. I am glad to inform you that the industrious work of our team and their tireless enthusiasm led to the completion of the project before the due date.

I invite you to visit the company and have a wonderful meeting with our director, CEO, and the project manager to discuss the details of the project. I am looking forward to the kind email from you confirming the date and time of the meeting. The company is happy working with you and looks forward to keeping this professional relationship strong and glued. 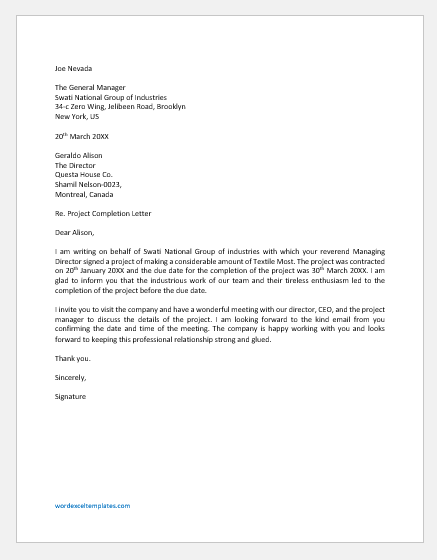 Re. Letter Reporting the Project Completion

I am eager on reporting the project completion news with you. J9Q signed a contract with our company on 20th February related to the manufacturing of face mask and surgical gloves packaging. The project met a delay when a sudden lockdown was inflicted in the country. Due to the situation of pandemic and ever-rising cases of Covid-19, the urgent demand for the face mask and surgical gloves packaging increased at a high rate suddenly, and our team stumbled on the sudden workload and many of the projects were mishandled. Moreover, Mrs. Zilbur, our project manager, was continuously trying to contact your general manager to inform the small delay in project completion but she could not.