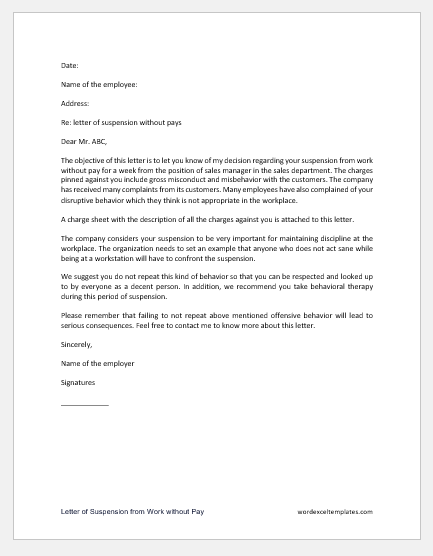 A letter of suspension is a formal letter written by the employer to those who deserve to be suspended. When people are suspended, their job is temporarily terminated without salary so that they can realize that they were wrongdoers due to which, they are being punished.

People are made to go away from the workplace when they show misconduct or breach the rules and policies of the organization they work for. Companies generally take them to task by suspending them without salary. There are also many other situations in which the letter of suspension is deemed important.

It is very important to write this letter in such a way that it can have a strong impact on the mind of the reader and also look professional. Follow the tips given below:

This letter is being written to notify you that you are being suspended from work for 10 days for the dates of 10th May to 20th May 2022. You will report back to work on 21st May 2022.

The company has taken this action because of the misconduct you demonstrated yesterday. You have misbehaved with Miss Jessica by passing some rude comments. Some of your co-workers also witnessed this incident. As per the policies of the company, this act of yours violates the rules and regulations of the company.

Maintaining discipline at the workplace is the top priority of the company. Therefore, we cannot tolerate anyone misbehaving and demonstrating misconduct at any level.

In the future, violation of any policy of the company from your side will result in additional disciplinary actions against you. In extreme cases, you can be terminated from the job. A copy of this letter is attached with your employment record file.

If you feel a grievance, you are allowed to write it in response to this letter of suspension.

You are suggested to give serious consideration to this action of the company taken against you.

Another letter of suspension without salary is given below:

The objective of this letter is to let you know of my decision regarding your suspension from work without pay for a week from the position of sales manager in the sales department. The charges pinned against you include gross misconduct and misbehavior with the customers. The company has received many complaints from its customers. Many employees have also complained of your disruptive behavior which they think is not appropriate in the workplace.

A charge sheet with the description of all the charges against you is attached to this letter.

The company considers your suspension to be very important for maintaining discipline at the workplace. The organization needs to set an example that anyone who does not act sane while being at a workstation will have to confront the suspension.

We suggest you do not repeat this kind of behavior so that you can be respected and looked up to by everyone as a decent person. In addition, we recommend you take behavioral therapy during this period of suspension.

Please remember that failing to not repeat above mentioned offensive behavior will lead to serious consequences. Feel free to contact me to know more about this letter.