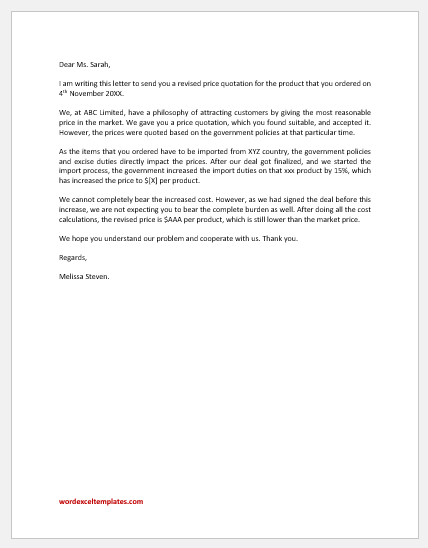 What is a revised price quotation letter?

A revised price quotation letter is a letter that is written and sent by an organization that has quoted a price for an order and is now revising it. It is addressed to the client organization which is interested in purchasing the product or service. In this letter, the organization informs the client about the revised price and provides proper reasoning behind the change. In addition, the share of the burden, especially in the case of an increased price, should be clearly stated as well.

Possible scenarios to write the letter?

This letter can be written in various scenarios, such as:

When this letter is written, the content is adjusted according to the effects on the client. However, generally, the following details are included in such letters:

I am writing this letter to send you a revised price quotation for the product that you ordered on 4th November 20XX.

We, at ABC Limited, have a philosophy of attracting customers by giving the most reasonable price in the market. We gave you a price quotation, which you found suitable, and accepted it. However, the prices were quoted based on the government policies at that particular time.

We cannot completely bear the increased cost. However, as we had signed the deal before this increase, we are not expecting you to bear the complete burden as well. After doing all the cost calculations, the revised price is $X per product, which is still lower than the market price.

We hope you understand our problem and cooperate with us. Thank you.