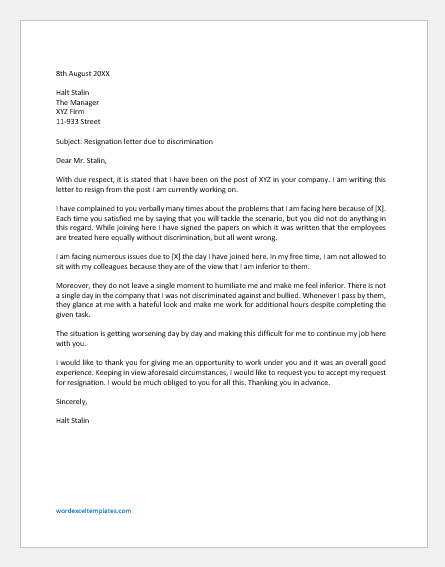 Resignation is an official act of quitting or giving up one’s position or office. When it comes from the perspective of an employee to leave his/her position than it is regarded as resignation, averse to forced termination. It is a disputed topic either an employee is terminated and resigned, because an employee who is terminated is eligible for deliberated pay while the one who resigns voluntarily is not eligible for all this.

A resignation letter is written from an employee to his employer mentioning the details to resign from the current position in which you are working. It clearly indicates the intentions of the person behind resigning. It should be kept short stating your reason directly.

There can be a reason for an illness that makes it impossible for an employee to continue the job. Sudden illness can be the cause of leaving the position. The third reason for resignation is difficulty working in the environment.

Sometimes, colleagues and boss’s negative attitude makes it worsened to continue the job. It can be due to discrimination or some other reason.

Its fourth reason can be due to relocation. Shifting to other places makes it difficult for a person to travel daily and the ultimate decision that a person makes is of resignation.

There can be numerous other reasons to resign if an employee has found a much better opportunity and want to work in a different industry or he/she has to resign due to unsolved issues.

This particular letter format has been set for the same purpose to mention the reason for discrimination.

Subject: Resignation letter due to discrimination

With due respect, it is stated that I have been on the post of XYZ in your company. I am writing this letter to resign from the post I am currently working on.

I have complained to you verbally many times about the problems that I am facing here because of [X]. Each time you satisfied me by saying that you will tackle the scenario, but you did not do anything in this regard. While joining here I have signed the papers on which it was written that the employees are treated here equally without discrimination, but all went wrong.

I am facing numerous issues due to [X] the day I have joined here. In my free time, I am not allowed to sit with my colleagues because they are of the view that I am inferior to them.

Moreover, they do not leave a single moment to humiliate me and make me feel inferior. There is not a single day in the company that I was not discriminated against and bullied. Whenever I pass by them, they glance at me with a hateful look and make me work for additional hours despite completing the given task.

The situation is getting worsening day by day and making this difficult for me to continue my job here with you.

I would like to thank you for giving me an opportunity to work under you and it was an overall good experience. Keeping in view aforesaid circumstances, I would like to request you to accept my request for resignation. I would be much obliged to you for all this. Thanking you in advance.