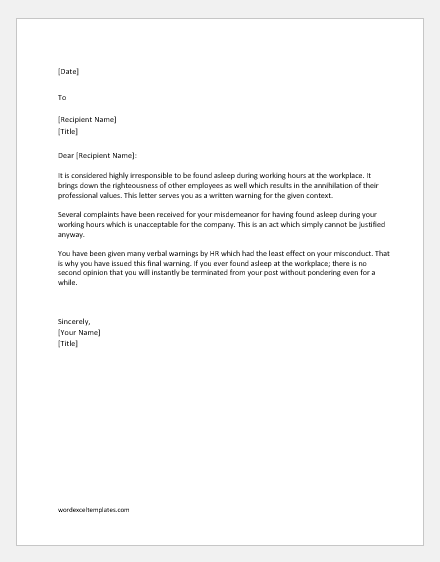 Warning Letter for Sleeping On Duty

It is considered highly irresponsible to be found asleep during working hours at the workplace. It brings down the righteousness of other employees as well which results in the annihilation of their professional values. This letter serves you as a written warning for the given context.

Several complaints have been received for your misdemeanor for having found asleep during your working hours which is unacceptable for the company. This is an act which simply cannot be justified anyway.

You have been given many verbal warnings by HR which had the least effect on your misconduct. That is why you have issued this final warning. If you ever found asleep at the workplace; there is no second opinion that you will instantly be terminated from your post without pondering even for a while.

Apology Letter for Sleeping On Duty

I am extremely sorry for my misconduct that has unintentionally upset many at my workplace. First, I thought to write a fabricated story to be pardoned for my sheer negligence but then I decided to come up with the truth no matter which way it shapes my destination.

I never revealed it, but I am doing two jobs at a time which leaves me with a very short time for taking rest & sleep.

Consequently, I remain sleepy due to less sleep at night which is totally my business. I guarantee you that I will manage some extra time for my relaxing hours to assure my activeness at the workplace. Kindly provide me the last chance to prove myself. I promise you I won’t let you down for this utmost favor.

Thanking you in anticipation! 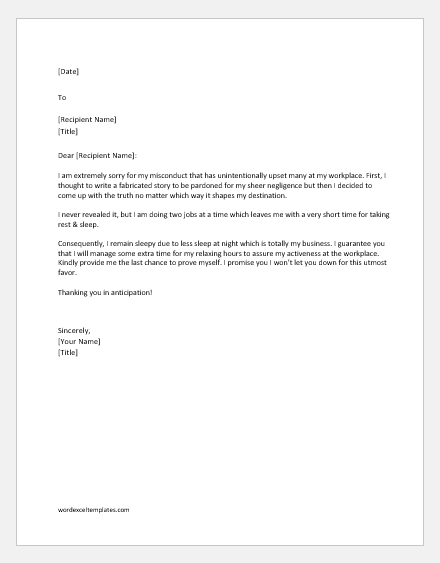 Explanation Letter for Sleeping On Duty

I was asked for a written explanation in the warning letter issued to me the last day for the carelessness shown on my part for what I have already written an apology letter.

First, I am sorry for disturbing you & my colleagues with my continual sleeping sessions in the workplace. Secondly, I would like not to justify this offense anyway.

I am the sole breadwinner of my family & that is why I have to work the whole day. I have a part-time job as well which makes it impossible for me to get proper sleep. Moreover, due to less sleeping hours, I have become a patient of sleepwalking as well which leaves no room to be soothed. But after getting a warning letter from my full-time job I have decided to resign from my part-time job to make things easier. I am quite hopeful that I will not let you complain about any such thing ever again.

Kindly accept my apologies for this unprofessional conduct which I assure you won’t be a part of my routine anymore. 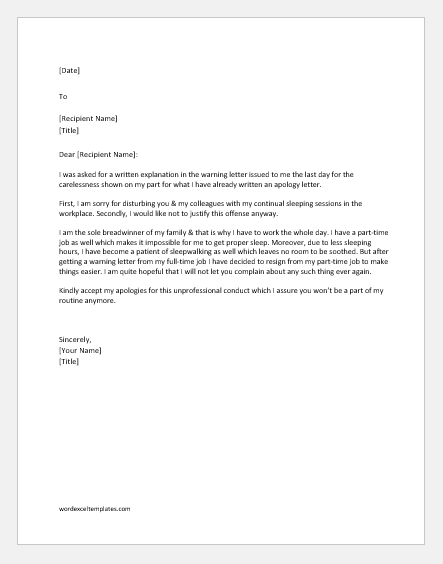 Reprimand Letter for Sleeping On Duty

It was brought into my notice that you have been showing least interest towards your work by having found asleep on duty which is said to be quite a normal thing in your case. To my surprise that this complaint was made so late for what I am going to hold your supervisor accountable. This is intolerable to have such lethal actions done in our office.

You must know the importance of being active in the workplace since this is what you are paid for. We cannot endorse such a passive attitude at all no matter how hard you work before or after that. Otherwise, it could become a routine for all the employees to provide different logics for this violation.

I am sure you have been told clearly about this being your very last chance in this company. In otherwise you will be fired without being paid for one working week as per the signed contract. 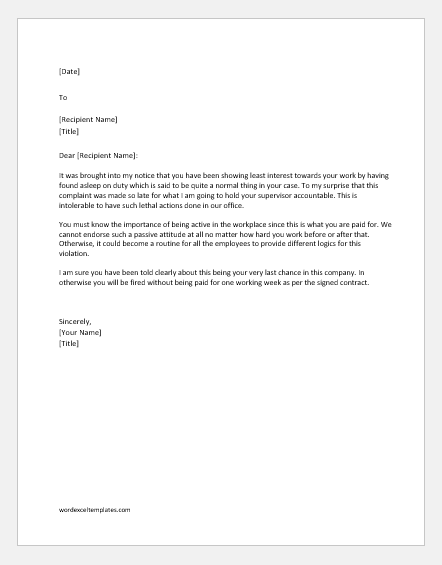