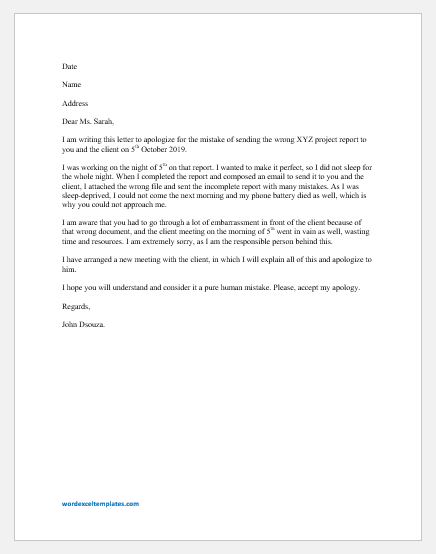 An apology letter to the boss for a mistake is a letter written by an employee, who has committed a mistake and wants to apologize for it. It is addressed to the employer or the manager/boss and may increase the chances of the employer’s overlooking and forgiving the mistake and saving the employee from any serious actions that might be taken by the employer.

Employees often make mistakes, which are either intentional or unintentional. Some of the examples of mistakes are:

Whether the employee intended to commit a mistake or not, it is always courteous and essential to apologize. In addition to a verbal apology, a written apology letter is always recommended for employees, as this makes a good impression on the employer.

Mainly, the effects of the mistake on the boss and the organization determine the information be included in an apology letter to the boss for a mistake. Usually, the following details are included:

As this letter from the employee is kept by the manager as a record, if the employee makes a similar mistake again, the manager can use this apology letter as a reference to punish him or escalate the employee’s case to the upper management by stating that the employee has already done the same sort of mistake in the past and has repeated it now even after apologizing for it.

I am writing to apologize for not doing the task assigned to me on time. Mr. [name], the manager on duty had told me to label the store racks with the updated prices on [date] at [time] but it completely slipped my mind and I did not do it in time which resulted in a lot of arguments on the checkout as the customers kept on insisting that the price being charged was incorrect and some even accused the store of cheating.

I accept the blame for all this unrest and customer dissatisfaction and I am extremely sorry for all the inconvenience I caused unintentionally.

I realize that a small mistake from my side caused a huge problem. I wish to apologize to Mr. [name] and want to express my regret for this unfortunate mistake.

This blunder was caused due to huge workload and was not deliberate. I had so much on my plate that I genuinely forgot about the task assigned to me. Please forgive me for this mistake. I assure you that this would not happen again.

Looking forward to your forgiveness and understanding.

I am writing to express my regret for the incident that took place on [date]. Mr. [name] had requested that the décor of the main hall in his son’s engagement ceremony be done in Roses. The proper procedure is to inquire about the availability of the flowers the client has requested from the florist and then confirm it with the client.

The mistake I made was that since we had used roses in a wedding décor a day ago, I assumed that roses would be easily available for Mr. [name]’s event too. But on the confirmation, the florist said that they had run out of supplies and all the available stock was already booked and hence unavailable.

I realize that my mistake caused our event management company, twice as much in flower costs as was assigned in the budget as we had to source them from an out-of-town florist causing extra money and a good bit of hassle.

I am embarrassed and I realize now that the SoPs made are for a reason and when we ignore them we suffer. I will be vigilant in the future and would not deviate from the written policy. I want to compensate for the loss I caused in man-hours. I would be available on my off days to put in my extra bit.

Please accept my apology and overlook my mistake. I assure you that I would never be negligent like this again.

I am writing this letter to apologize for the mistake of sending the wrong XYZ project report to you and the client on 5th October 20XX.

I was working on the night of the 5th on that report. I wanted to make it perfect, so I did not sleep for the whole night. When I completed the report and composed an email to send it to you and the client, I attached the wrong file and sent the incomplete report with many mistakes. As I was sleep-deprived, I could not come the next morning and my phone battery died as well, which is why you could not approach me.

I am aware that you had to go through a lot of embarrassment in front of the client because of that wrong document, and the client meeting on the morning of the 5th went in vain as well, wasting time and resources. I am extremely sorry, as I am the responsible person behind this.

I have arranged a new meeting with the client, in which I will explain all of this and apologize to him.

I hope you will understand and consider it a pure human mistake. Please, accept my apology.