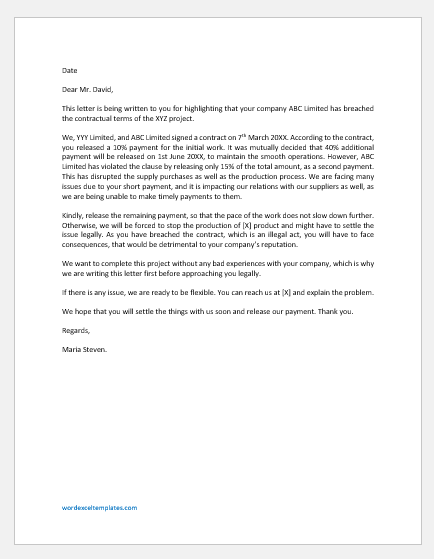 Breach of the contract is an unlawful activity and therefore, no one is obligated to tolerate it. A contract is a legally binding agreement between two or more parties. It necessitates for each involved party to not do certain things. However, sometimes we see infractions on the part of any member of the agreement.

Breaching the agreement is not so easy or it is not something that you can take with a grain of salt. Due to this, most of the contracts also mention the repercussions of the breach. Here are different ways in which breach of contract is handled. One of the common ways is to write a letter.

It is a formal letter that a person or an organization writes to someone who has been involved in the violation of the contract. When any party in an agreement fails to fulfill that agreement’s requirements, a breach or infraction of the contract occurs. In general, only those people get into a legally binding agreement, who have the potential to fulfill its requirements. So, they are expected to not violate it.

There are some situations in which one party has to pay a specific amount to another party as per the agreement. However, the party or person bound to pay pays only the partial amount.

Unfortunately, some people don’t take the contract seriously. They pay the partial amount only. They should be told that they have been involved in the infringement and they will have to face serious consequences of it.

Some people don’t breach the contract out of carelessness or any other problem. They do it because the service provider has not been working up to their expectations and they don’t want to pay the full amount until he fixes what he has done. You write an infraction of the contract letter to make the recipient realize that making the short payment was not the right decision.

Things to remember while writing to someone about the infringement:

In most cases, infringement or breach of the agreement makes people angry. However, things in the professional world are required to be dealt with wisdom instead of emotions. So, you should know how to draft your letter so that you can communicate the right information to the recipient instead of expressing your emotions. Below are some tips to follow:

Just like any other formal letter, this letter should also be kept to the point. Keeping the letter short does not mean missing out on important details. However, remember to add only those details that are common and important for the reader.

Refer to the agreement that has been violated:

Although the person you are writing to knows which agreement has been violated, it is better to keep things clear. Referring to the agreement and that particular clause that has been violated also lets you keep this letter as proof that you did tell the recipient about the breach. So, when you take any legal action, you can use it as evidence.

Give details about short payment:

In this letter, details regarding the payment should be provided. Tell the reader how much he was supposed to pay and what amount you received from him. Ask him to pay you the remaining amount. To prompt the reader, mention the deadline to clear the payment.

Along with the details, the seriousness of the matter should also be communicated. You cannot communicate it implicitly, but you can show it by keeping the letter error-free. Ask someone to read the letter before you send it away.

Attach the copy of the agreement:

The copy of the agreement that has been breached should be there with the letter when the reader receives the letter so that he can also confirm the breach.

This letter is being written to you for highlighting that your company ABC Limited has breached the contractual terms of the XYZ project.

We, YYY Limited, and ABC Limited signed a contract on 7th March 20XX. According to the contract, you released a 10% payment for the initial work. It was mutually decided that 40% additional payment will be released on 1st June 20XX, to maintain the smooth operations.

However, ABC Limited has violated the clause by releasing only 15% of the total amount, as a second payment. This has disrupted the supply purchases as well as the production process. We are facing many issues due to your short payment, and it is impacting our relations with our suppliers as well, as we are being unable to make timely payments to them.

Kindly, release the remaining payment, so that the pace of the work does not slow down further. Otherwise, we will be forced to stop the production of [X] product and might have to settle the issue legally. As you have breached the contract, which is an illegal act, you will have to face consequences, that would be detrimental to your company’s reputation.

We want to complete this project without any bad experiences with your company, which is why we are writing this letter first before approaching you legally.

If there is any issue, we are ready to be flexible. You can reach us at [X] and explain the problem.

We hope that you will settle the things with us soon and release our payment. Thank you.