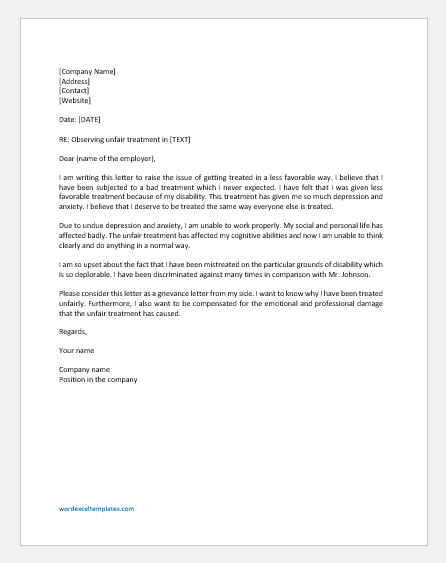 If you have been treated unfairly at work, you can write a grievance letter to your boss telling him about the unfair treatment. One should be careful while writing this letter as most of the employers consider this letter trash.

It is important to note that employees can write this letter well and handle the situation afterward when they get a complete understanding of their employment rights. If you are not aware of your rights, you will result in writing a grievance letter in a very bad way that is likely to not influence your employer.

Why a grievance letter is written?

How to write the grievance letter for unfair treatment?

It has been told earlier that the grievance letter must be written properly so that the employer takes it seriously and take some action after reading it. To deal you with this, we are giving you step by step instructions to help you:

After reading this letter, your employer might think that you have some misunderstanding. Therefore, you need to tell in detail why and how you felt mistreatment. Tell the employer that you are aware of your employment rights and therefore, the company must fairly treat you just as anyone else working in the company is treated.

Every kind of bad and unfair treatment has compensation. Anyone who is treated badly can demand compensation. Due to this, the employee who has been treated unfairly can ask for compensation.

At the end of the letter, express your hope that the employer will take action on whatever you have explained. A probe should be conducted in this matter so that you can get justice.

This is a sample letter of explanation that is written by an employee who is disabled and has felt that he is not being treated as better as other employees. In this letter, the employer tells the employee how he has been mistreated.

RE: Observing unfair treatment in [TEXT]

Dear (name of the employer),

I am so upset about the fact that I have been mistreated on the particular grounds of disability which is so deplorable. I have been discriminated against many times in comparison with Mr. Johnson.

Please consider this letter as a grievance letter from my side. I want to know why I have been treated unfairly. Furthermore, I also want to be compensated for the emotional and professional damage that the unfair treatment has caused.

Company name
Position in the company