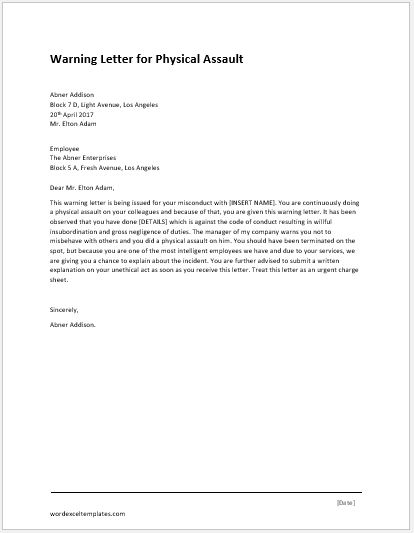 Rational behavior of someone can harm the people in the vicinity. Various situations arise when people face physical assault. Assault is sometimes defined as deliberate actions to harm someone. When a person is physically assaulted by someone then he must respond physically or use Law to protect himself.

This act of disrespect is the result of rational behavior of the person that we usually ignore and then a stage comes when the said person uses physical means to hurt someone. Initially, these types of people treat other people with disrespectful verbal conduct but when their wrath is not satisfied with verbal misconduct they shift to the next level of harming somebody physically.

Laws are formed to protect people from such physical assaults and complaints can be launched against such people. It is also recommended to point out such persons who are mentally disturbed so that timely actions may be taken to avoid any unpleasant incident.

This warning letter is being issued for your misconduct with [INSERT NAME]. You are continuously doing a physical assault on your colleagues and because of that, you are given this warning letter.

It has been observed that you have done [DETAILS] which is against the code of conduct resulting in willful insubordination and gross negligence of duties. The manager of the company warns you not to misbehave with others and you did a physical assault on him.

You should have been terminated on the spot, but because you are one of the most intelligent employees we have and due to your services, we are giving you a chance to explain the incident. You are further advised to submit a written explanation of your unethical act as soon as you receive this letter. Treat this letter as an urgent charge sheet.

Please take this message as a warning issued against you for your misdemeanor and unprofessional behavior with our senior employee Lucie Magnet.

You have been involved in attacking physically to other workers and this warning is in response to those actions. You were caught in creating a mess without any reason which is strictly against the policies of the company. You are supposed to perform ethically and sophistically on office premises.

You were already been given notice against your conduct but you did not take it seriously and this time transgressed all your limits. You have always been an honest and hardworking employee, that’s why I am giving you the last warning. If next time you caught up doing so then you will be terminated without any prior notice. I hope you will not disappoint me next time.

This is an official warning message to you for your fraudulent action. It has been reported that you are involved in creating a baseless fight with your colleagues and this letter is against your misconduct.

Attacking someone either verbally or physically is strictly prohibited on the company’s premises and it is negligence on your part. You were warned by Mr. Arthur, your team head, to behave politely with others and in response you attacked him.

Seeing your previous record, I am giving you a chance to improve yourself; otherwise, you could have been fired on the spot. You are directed to meet me tomorrow at 11 am along with an explanatory note detailing the incident. Do not ignore this message and take it as a last warning.

Dear Michael, I have got really disappointed after coming to know your unprofessional conduct at the workplace with your fellow workers. I had already received many complaints against you and in spite of giving many verbal warnings, I am compelled this time to issue a written warning notice against you.

Yesterday, Sidney Smith visited me and he was bleeding. I got so much frustrated after coming to know that you are the culprit behind this. I think you might have forgotten the policy of the company, according to that you cannot harm others physically.

This case is not tolerable at all and I want you to bring an explanation letter tomorrow. I hope things are clear to you now and if I hear any such complaint against I will take legal action and you will end up terminating your job.

This is such a shameless and off-putting incident and has made me fall in the parents’ eyes. I am giving you the last warning to bring politeness in your behavior and not harm students physically. For now, I am deducting 10% of your salary as punishment but if next time I receive any such complaint against you then you will be immediately thrown out of your job. I hope you will improve yourself and will not give me a chance to terminate you.

This warning message is the last chance given to you to pull your socks up if you really want to continue your job at ABC Company. You had been involved to attack Messy John over a trivial matter and it started for no reason. You blow him first and in response, he defended himself, and you started beating him.

I got really astonished after hearing all this as I was not expecting such misbehavior from you. This act is not acceptable at all and you are directed to not repeat such a misdemeanor in the future. Hoping to see positive change in you.