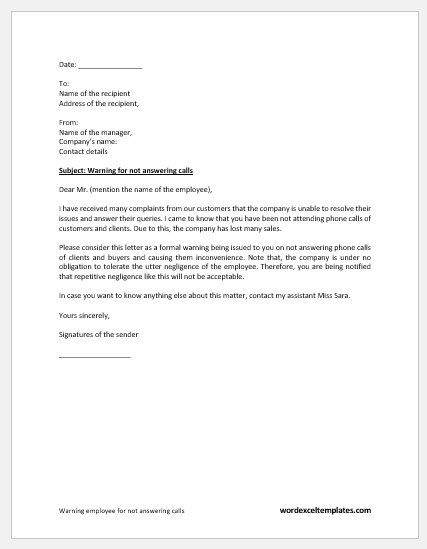 Communication is the key priority of any organization. Companies don’t like hiring people who don’t communicate whenever they are needed to communicate. For instance, if an employee is on leave for a month after assigning his responsibilities to someone else and that person needs to know to take any kind of guidance, the employee on leave should communicate. There are many instances when the employee doesn’t attend the phone call and irritates his boss.

What is a warning on not answering calls?

When an employee doesn’t answer phone calls, he shows irresponsible behavior and therefore receives a warning from his boss. This warning gives a message to the worker that if he doesn’t stop acting irresponsible by not attending phone, he will have to face serious repercussions.

The boss generally issues the warning in the form of a written letter or an email. The written warning is very important since it becomes a permanent part of the employee’s file. It also includes the signatures of the manager that show that it has come from authentic sources.

Why do employers write the warning?

Employers face serious inconvenience when they are unable to communicate with someone. In some cases, the employee has a job responsibility to attend the phone call and answer the queries of the customers and he escapes from fulfilling this responsibility, he should know that he has committed misconduct and expect disciplinary action against him.

In what situation the warning letter for not attending the phone can be written?

Oftentimes, people working in the company don’t take their job responsibilities seriously. This happens because there is no one to reprimand them for their negligence. Due to this, companies never let such events go unnoticed. Every organization has its strategy to deal with negligence.

When a company chooses to correct its employees by reprimanding them more seriously so that they can understand the criticality of the situation, it writes a warning letter.

Some employees are assigned the responsibility to talk to the valued customers of the company and satisfy them with their answers. In addition to it, those disgruntled customers who come with dissatisfaction are also handled carefully by customers. However, some employees don’t attend their calls or put them on hold. When the company comes to know about it, it takes action against such employees.

How should a formal warning letter be drafted?

Add the following points to your letter and draft a warning letter that has a serious tone and a clear message for the employee:

Even before the employee starts reading the letter, the subject prepares him in advance for reading something he might not be expecting.

Warnings are sent to those who don’t seem to improve their behavior without receiving a warning. Adding a warning statement and then specifying the reason for issuing the warning.

Discuss the outcomes of the employee’s misconduct:

The employee should know how not attending phone calls has caused inconvenience to the company. This way, the employee will be able to understand how the warning he is being added issued makes sense.

From:
Name of the manager,
Company’s name:
Contact details

Subject: Warning for not answering calls

Dear Mr. (mention the name of the employee),

I have received many complaints from our customers that the company is unable to resolve their issues and answer their queries. I came to know that you have been not attending phone calls of customers and clients. Due to this, the company has lost many sales.

Please consider this letter as a formal warning being issued to you on not answering phone calls of clients and buyers and causing them inconvenience. Note that, the company is under no obligation to tolerate the utter negligence of the employee. Therefore, you are being notified that repetitive negligence like this will not be acceptable.

In case you want to know anything else about this matter, contact my assistant Miss Sara.