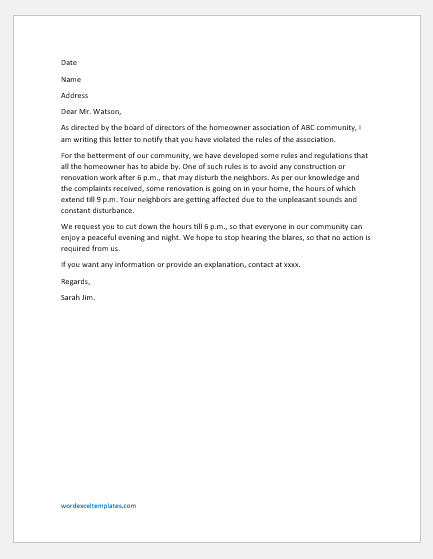 The tone of the violation letter should not be condescending, but a little strict. The extent of violation would be the main factor affecting the information stated in the letter. Common details are

As the homeowner association benefits everyone in the community, the violators often change their practice after receiving this violation letter. However, if they do not improve their behavior, the board of directors may take some serious action, as deemed necessary by them.

As directed by the board of directors of the homeowner association of ABC community, I am writing this letter to notify you that you have violated the rules of the association.

For the betterment of our community, we have developed some rules and regulations that all the homeowner has to abide by. One such rule is to avoid any construction or renovation work after 6 p.m., that may disturb the neighbors. As per our knowledge and the complaints received, some renovation is going on in your home, the hours of which extend till 9 p.m. Your neighbors are getting affected due to the unpleasant sounds and constant disturbance.

We request you to cut down the hours till 6 p.m. so that everyone in our community can enjoy a peaceful evening and night. We hope to stop hearing the blares so that no action is required from us.