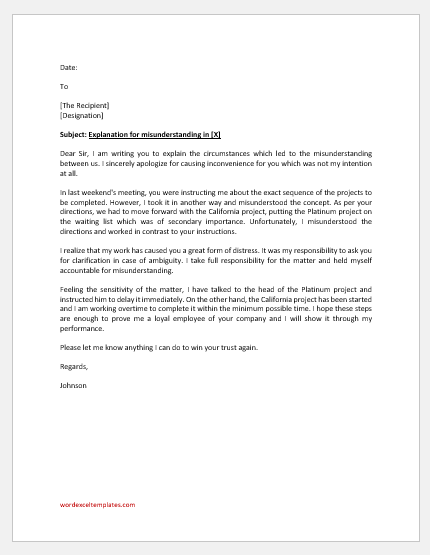 Subject: Explanation for misunderstanding in [X]

Dear Sir, I am writing you to explain the circumstances which led to the misunderstanding between us. I sincerely apologize for causing inconvenience for you which was not my intention at all.

In last weekend’s meeting, you were instructing me about the exact sequence of the projects to be completed. However, I took it in another way and misunderstood the concept. As per your directions, we had to move forward with the California project, putting the Platinum project on the waiting list which was of secondary importance. Unfortunately, I misunderstood the directions and worked in contrast to your instructions.

I realize that my work has caused you a great form of distress. It was my responsibility to ask you for clarification in case of ambiguity. I take full responsibility for the matter and held myself accountable for misunderstanding.

Feeling the sensitivity of the matter, I have talked to the head of the Platinum project and instructed him to delay it immediately. On the other hand, the California project has been started and I am working overtime so as to complete it within the minimum possible time. I hope these steps are enough to prove me a loyal employee of your company and I will show it through my performance.

Please let me know anything I can do to win your trust again.

Subject: Explanation for misunderstanding at [X]

This letter is a little attempt to explain to you the whole situation which has caused misunderstanding in your mind about me. I hope you will get my point of view in a true sense.

Miss Anna is my relative as well as ex-colleague in [XYZ] company. On [date], we both were discussing an upcoming family event in a happy mood during lunchtime. My office colleagues noticed us and reported the incident in the wrong way. They told you that I was harassing Miss Anna which was absolutely wrong. Due to their wrong reporting, you called me to your office, reprimanded, and issued an explanation letter.

Dear Sir, I know that a bad image has been created in your mind as a result of this misunderstanding. You can ask Miss Anna whether I have harassed her or not. Hopefully, you will get a clear picture then.

I want my good image to be restored again and at the same time, expect a fair investigation from your side. Please let me know anything you want to ask regarding this matter. 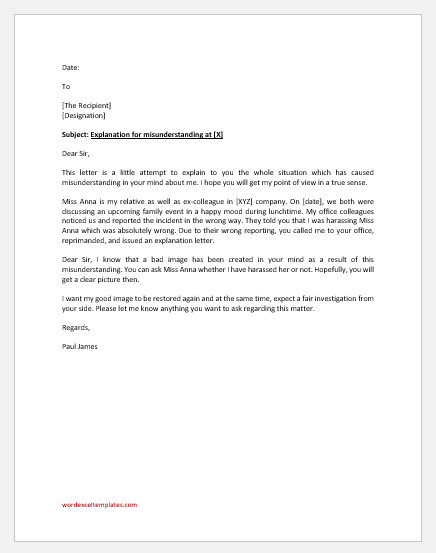 Re. Apology for the Created Misunderstanding Regarding Improvisation in the Proposal to SIGMA STRENGTH w.r.t Presentation C-17 Dated 12-09-21

I am regretful and writing this with a very heavy heart to apologize and clarify the matter of improvisations in the proposal and my three days leave. Sir, I have been working here for five years and I have always been considered as an important member of the CHMC Team in the projects like Actema and Xeron-109. I have always remained sincere and honest regarding everything related to work correlated with my hard work.

Annual Profile Reviews and Monthly Performance Appraisals can be studies or checked out for the validation of my point of performance. I have always worked in compliance with the company rules and fulfilled all the TORs of working under my designation.

I have been working on the proposals of the General YKFH Groups Project and other minor projects like Development in the Social Sector, Social Media Marketing, and General Assistance. I had completed the proposal making and then I went for three days leave as my brother was seriously ill and I had to look after him at home.

When I sent the leave Performa, I was responded with a lot of strict and unprofessional notions by the Senior HR Manager. On complaining, I was silenced by my immediate supervisor.

Later, after having dealt with this, I received an email from you with the improvised version of the proposals. I became angry at the unwanted interference and improvisations. Influenced by the earlier event, I was angry and blind with the anger I sent you a rude response to the proposal improvisation and editing. After coming back to the office after three days of my leave, I realized that the improvisations had been made on the account of instructions by the ACMR Project Team Leader (PTL).

Steering to the company and being Senior Instructor in the project management, I firmly believe that you are rightful in making the amendments and improvisations where needed.

I apologize for my wrong trance and clarify that the email (dated: 15-09-21) was complemented by lots of unwanted events. Therefore, I request you to pardon my objectionable demeanor and consider it a misunderstanding caused by miscommunication on the project.

I would be looking forward to the kind acknowledgment of this letter from you. Please write to me at [EMAIL]. Thank you. 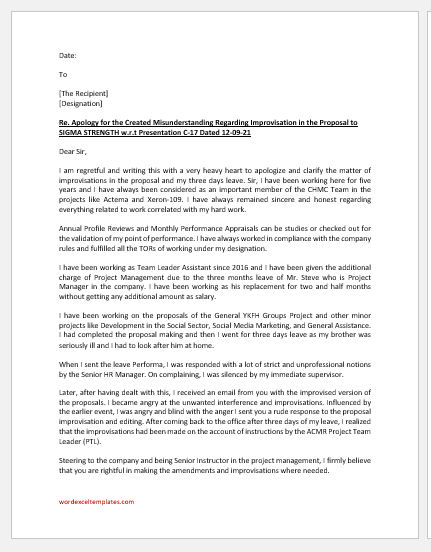