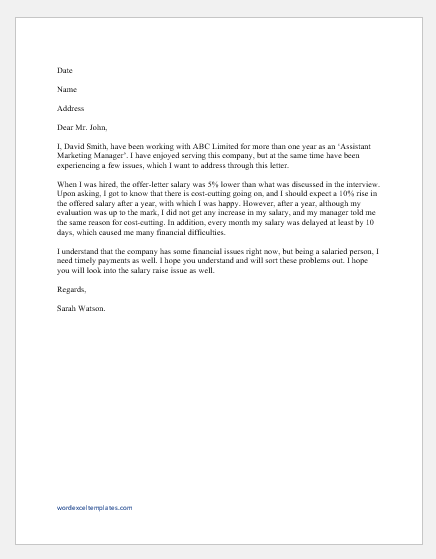 An employee complaint letter to HR is a letter written by an employee to the human resource (HR) department of a company the employee is working in. This complaint can be about the company, policies, boss, subordinate or colleague. In the letter, the employee communicates his concern to the HR department, so that it can be sorted out and resolved.

When an employee is working in an organization, he might have to face various issues, such as office politics, salary delays, the laziness of the subordinates, abusive or unprofessional boss, etc. It is very important to communicate the matter to the relevant authority so that timely action can be taken. For this, writing a complaint letter is one of the best ways of putting the issue forward in a formal, professional and written way.

The length and content of this letter are mainly dependent on the complaint that is being launched. However, the general details included in an employee complaint letter to the HR are:

I, Smith Johnson, am working as a ‘Sales Expert’ at ABC Limited for three years. I have had a good experience overall, but now I am facing some issues that are affecting my image and work, even without being at fault.

Mr. Jim William is one of my team members and comes under my direct supervision. I am not only answerable for his supervision, but many of my tasks are dependent on his performance as well. He is a lazy person and often delays deadlines, which automatically brings delays in my deadlines as well, for which my manager holds me responsible.

I have tried to talk to Mr. William many times but in vain. Now, I want to launch a complaint against him, and I expect you to take suitable action. I am hoping that you will deal with this matter in a fair manner. 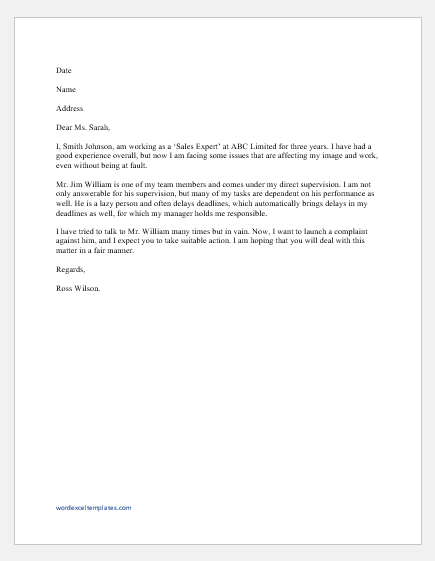 I, David Smith, have been working with ABC Limited for more than one year as an ‘Assistant Marketing Manager’. I have enjoyed serving this company, but at the same time have been experiencing a few issues, which I want to address through this letter.

When I was hired, the offer-letter salary was 5% lower than what was discussed in the interview. Upon asking, I got to know that there is cost-cutting going on, and I should expect a 10% rise in the offered salary after a year, with which I was happy. However, after a year, although my evaluation was up to the mark, I did not get any increase in my salary, and my manager told me the same reason for cost-cutting. In addition, every month my salary was delayed at least by 10 days, which caused me many financial difficulties.

I understand that the company has some financial issues right now, but being a salaried person, I need timely payments as well. I hope you understand and will sort these problems out. I hope you will look into the salary raise issue as well.