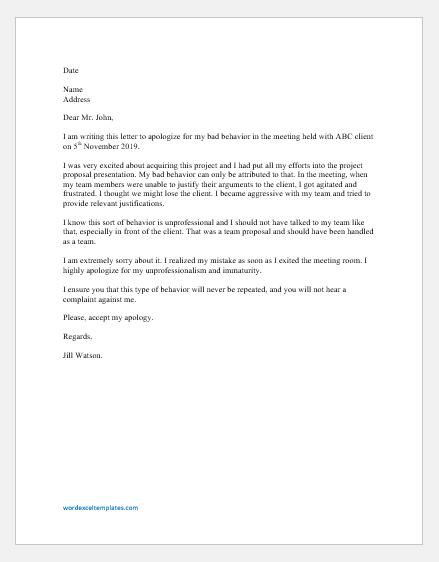 An apology letter to the boss for bad behavior is a letter written by an employee who has exhibited unprofessional behavior and wants to apologize for it to his employer/boss. This letter indicates the employee’s realization and remorse and is intended to pacify the situation.

Being humans, sometimes, employees may behave unacceptably. However, as it affects the work atmosphere, employers try to maintain control over employees’ behavior. Strict policies that need to be adhered to by the employees are stated in the employee handbook so that employees are well aware of them.

If an employee still shows unprofessionalism but realizes his mistake, he should write an apology letter to his boss and provide explanations of his behavior as well as apologize for it. Along with that, to evade the employer’s drastic actions, he needs to ensure the employer that his behavior would be improved in the future.

The letter needs to be polite-toned. If an employee cannot own his mistake and wants to put the blame on someone else’s shoulder, there is no point in writing an apology letter. In addition, if an employee commits to his boss that bad behavior would not be repeated, he needs to follow that in actuality as well and not just in writing.

I am writing this letter to apologize for my bad behavior in the meeting held with ABC client on 5th November 2019.

I was very excited about acquiring this project and I had put all my efforts into the project proposal presentation. My bad behavior can only be attributed to that. In the meeting, when my team members were unable to justify their arguments to the client, I got agitated and frustrated. I thought we might lose the client. I became aggressive with my team and tried to provide relevant justifications.

I know this sort of behavior is unprofessional and I should not have talked to my team like that, especially in front of the client. That was a team proposal and should have been handled as a team.

I am extremely sorry about it. I realized my mistake as soon as I exited the meeting room. I highly apologize for my unprofessionalism and immaturity.

I ensure you that this type of behavior will never be repeated and you will not hear a complaint against me.