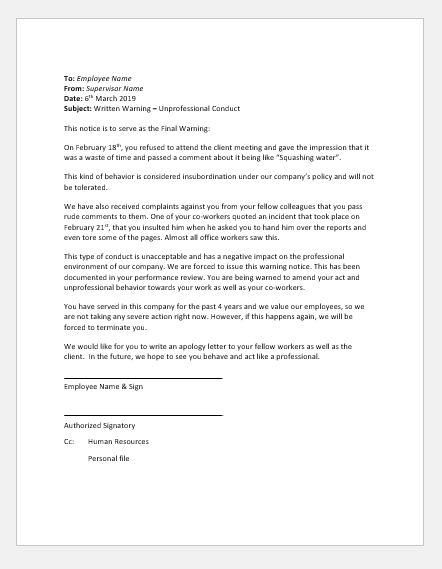 A professional workplace promotes productivity, performance, and teamwork. Sometimes, employees are insensitive to their behaviors in the workplace, which interferes with the positivity of the environment and affects the functionality of the team. An employee’s behavior and attitude are a direct reflection of the company. There is a fine line between informal and being unprofessional.

There are many types of unprofessional conduct, including habitual absence, harassment, or invading personal space. These behaviors cause a disturbance in an organization and should be dealt with immediately.

There are many types of unprofessional conduct and some of the examples are given below:

If the company’s ethics code is violated, it should first be discussed with the person involved. If this doesn’t solve the problem, then the matter should be reported to human resources. The process should be fair, and the employee should be given a reasonable chance of defense.

In case of misconduct, the actions should be noted down, along with the dates and details of the conduct. The parts, which the employee has violated from the company’s handbook or code of conduct, should be identified and mentioned. This will serve as the basis of how many times an employee violated the code.

One of the ways of preventing this conduct is by maintaining a confidential incident reporting system.

Sometimes the unprofessionalism is unintentional. This might be because of culture shock and value differences. It is important to be cautious about professional conduct and being observant of the local cultural norms.

The concept of boundaries, privacy, discretion, and embarrassment is different across various cultures. Dress codes and standards of modesty also vary from culture to culture. When an employee acts unprofessionally, the company first tries to resolve the issue by informal warning or counseling. If there is no immediate response of improvement, then the company issues a legal warning notice to the employee, sometimes followed by termination.

A warning notice is a formal note issued by the authorities against the inappropriate and misconduct of the employee. Generally, the format of a warning notice consists of

This notice is to serve as the Final Warning:

On February 18th, you refused to attend the client meeting and gave the impression that it was a waste of time, and passed a comment about it being like “Squashing water”.

This kind of behavior is considered insubordination under our company’s policy and will not be tolerated.

We have also received complaints against you from your fellow colleagues that you pass rude comments to them. One of your co-workers quoted an incident that took place on February 21st, that you insulted him when he asked you to hand him over the reports and even tore some of the pages. Almost all office workers saw this.

This type of conduct is unacceptable and has a negative impact on the professional environment of our company. We are forced to issue this warning notice. This has been documented in your performance review. You are being warned to amend your act and unprofessional behavior towards your work as well as your co-workers.

You have served in this company for the past 4 years and we value our employees, so we are not taking any severe action right now. However, if this happens again, we will be forced to terminate you.

We would like for you to write an apology letter to your fellow workers as well as the client.  In the future, we hope to see you behave and act like a professional.

License: ENERGY  (Personal use only)
(Distribution) by Kate Elizabeth(CEO)