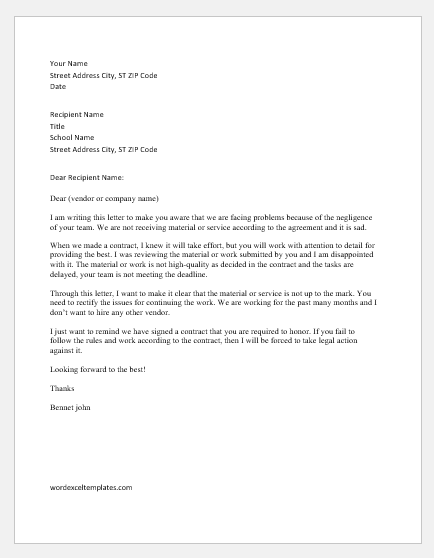 Warning letter to the vendor as shown by the name is a letter in which the vendor is alerted about the deal and the legal action taken against the company if the requirements are not fulfilled. It is obvious when a vendor or company is hired to get the services then the best is expected but sometimes, the vendor doesn’t follow the rules and provide the services according to the deal. If negligence becomes the habit of the vendor, then sending a warning letter is the best option through which the quality of service can be raised depending on the requirement.

Key points for the warning letter:

Some things to never ignore in the letter:

Sample of Warning letter to the vendor for non-compliance

I am writing this letter to make you aware that we are facing problems because of the negligence of your team. We are not receiving material or service according to the agreement and it is sad.

When we made a contract, I knew it will take effort but you will work with attention to detail for providing the best. I was reviewing the material or work submitted by you and I am disappointed with it. The material or work is not high-quality as decided in the contract and the tasks are delayed, your team is not meeting the deadline.

Through this letter, I want to make it clear that the material or service is not up to the mark. You need to rectify the issues for continuing the work. We are working for the past many months and I don’t want to hire any other vendor.

I just want to remind we have signed a contract that you are required to honor. If you fail to follow the rules and work according to the contract, then I will be forced to take legal action against it.

Looking forward to the best!