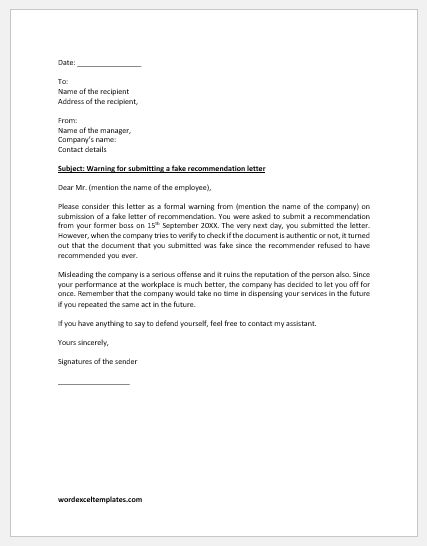 When a person joins a company, he or she has to submit some documents to prove credibilities such as an experience letter, letter of recommendation, and some other similar documents. In an attempt to get a job, some people manage to get fake credentials that help them outperform others and fill in the available vacancy. This seems to be very beneficial. However, people risk their careers badly when they get involved in such things.

What is a warning letter for submitting a bogus letter of reference?

If it turns out that the recommendation is fake, the employer warns and reprimands the employee for being clever enough to cheat an organization.

When to warn about fake reference letters?

Cheating has no justification. Therefore, companies often let off such workers who try to deceive them but never trust them again. Companies generally have their sources to get the verification of documents done. For instance, they can contact the person whose name has been mentioned as a referee and can ask him if he has recommended the subject.

There is a systematic way in which the worker is sent a written warning. The employer can walk through the following steps and write a professional warning letter:

The policy to deal with employees who don’t show honestly in their dealings varies greatly from company to company and from situation to situation. Every manager needs to make sure that whatever actions he or she takes are in accordance with the policy of the company. Therefore, thorough information regarding handling dishonest workers should be obtained.

Even if you are feeling bad about being deceived, you cannot cross your limits. So, let your worker know that you are very unhappy with this and therefore, you are issuing him an official warning so that he never thinks again to show involvement in any mischievous activity.

Let him know how you found the document to be fake:

The employee must have submitted the fake document with confidence, and he might not accept his mistake unless you brief him as to what made you realize the fakeness. This will also make it clear to the worker that it has been proved that he was dishonest and now he should not try to justify his actions.

Inform the employee that cheating is not acceptable:

Warning always has a reason behind it. Most employers write the warning because they don’t what such things to happen again. Therefore, the employer must also ask the recipient that he should not repeat this act if he wants to continue working. In addition to it, the employer should tell the recipient that dishonestly becomes a big taint on the personality of the worker that remains with him for the rest of his life if he gets terminated out of it.

From:
Name of the manager,
Company’s name:
Contact details

Dear Mr. (mention the name of the employee),

Please consider this letter as a formal warning from (mention the name of the company) on submission of a fake letter of recommendation. You were asked to submit a recommendation from your former boss on 15th September 20XX. The very next day, you submitted the letter. However, when the company tries to verify to check if the document is authentic or not, it turned out that the document that you submitted was fake since the recommender refused to have recommended you ever.

Misleading the company is a serious offense and it ruins the reputation of the person also. Since your performance at the workplace is much better, the company has decided to let you off for once. Remember that the company would take no time in dispensing your services in the future if you repeated the same act in the future.

If you have anything to say to defend yourself, feel free to contact my assistant.