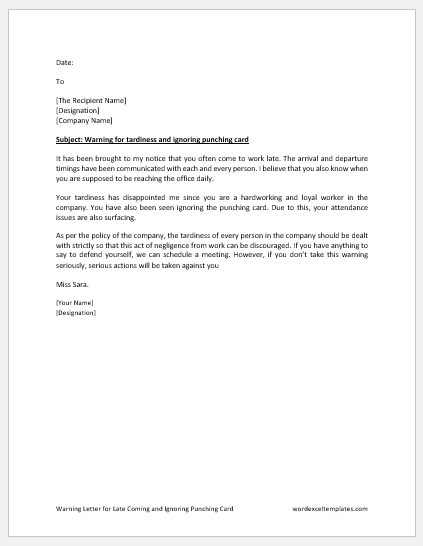 If you are an employee, you must have experienced the feeling of unhappiness or dissatisfaction from one of your underperforming employees. When this happens, most of the managers focus on ‘’when’’ instead of ‘’how’’.

Just like the workplace, writing warning letters and communicating warnings also have some rules. If a managerial director manages to follow these rules more or less religiously, he can reap fruitful results very easily.

What is a warning letter to an employee who comes late?

This is a formal letter written by an employer to his employee to warn him of his habitual late coming. This letter also informs the recipient of the letter about the potential consequences one should expect if they fail to correct their behavior.

Sometimes the employee not just comes late but also ignores the punching card. Due to this, his attendance is not marked. When everyone working in the company is using a punching card for attendance records and one person ignores it, the company warns him of this action as it creates many problems for those who manage and control attendance at the workplace.

When to give the warning?

There is a disciplinary procedure that every organization follows. This procedure varies from company to company. At the last phase of these procedures, a warning letter is issued. The warning is oftentimes an indication that this is the last step the employee could take to make the employee improve his behavior and stop coming late to work.

Why is a warning given?

At the workplace, warnings have a big role to play. Without warnings, some people never improve their attitude. Some people also refer to these warnings letters as improvement notes because it has been seen that most of the time; people prefer not repeating the same behavior instead of facing serious outcomes.

A guide to writing a warning letter to latecomers:

When you write a warning letter, you need to consider many points such as:

For issuing the warning, there is a proper procedure. Some companies issue one warning only while some issue multiple warnings and give plenty of chances to the employee before he is terminated from the job. Before you start writing, just recall the procedures.

Know what to write:

These letters are generally written carefully because the manager cannot use certain words and certain approaches to reprimand the person who works under him. For instance, he cannot pass personal remarks to the personality of the employee.

Determine the duration of the warning:

In some cases, the warning has a duration in which the behavior of the employee is monitored. If you have also decided to monitor the employee, you can give him the notice of a specific time period and let him know that after that time period, the company will decide whether to issue you another warning or not.

Allow the employee to defend himself:

This letter is not about accusing a person and giving a verdict. Enable the recipient to defend himself if he has anything to say that can support his tardiness or ignorance of punching cards.

It has been brought to my notice that you often come to work late. The arrival and departure timings have been communicated with each and every person. I believe that you also know when you are supposed to be reaching the office daily.

Your tardiness has disappointed me since you are a hardworking and loyal worker in the company. You have also been seen ignoring the punching card. Due to this, your attendance issues are also surfacing.

As per the policy of the company, the tardiness of every person in the company should be dealt with strictly so that this act of negligence from work can be discouraged. If you have anything to say to defend yourself, we can schedule a meeting. However, if you don’t take this warning seriously, serious actions will be taken against you