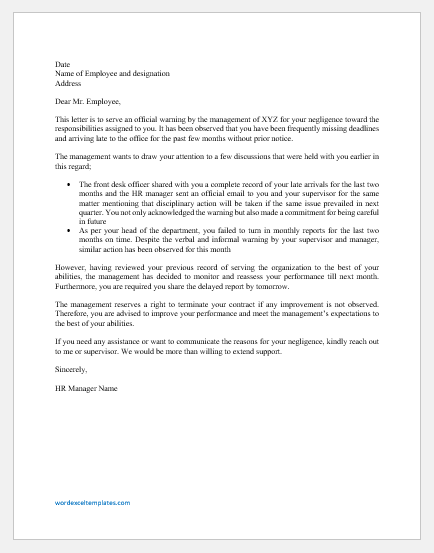 When we are paid for performing a certain type of duties, it becomes our responsibility to perform those duties according to defined rules and codes. If we don’t perform our duties well and show a kind of negligence at work, we will be answerable for it. Sometimes, organizations also terminate those employees who don’t work effectively and show irresponsible behavior in the workplace instead.

It should be noted that the termination of the employee is not the only solution to deal with the negligence. Some organizations also warn their employees before deciding to terminate them. The employees are warned because several times, they take the warning seriously correct themselves.

Why write the warning letter for a lack of responsibility?

At the time of appointment of the person, the company makes that person read all the instructions and code of conduct to be shown at the workplace. The employee reads them thoroughly before joining. Once he has shown agreement to those rules and regulations, he cannot refuse to follow them.

Tips to follow while writing the warning letter for irresponsible behavior:

If you have to write the warning letter and you don’t know how to, you can follow the following guidelines: