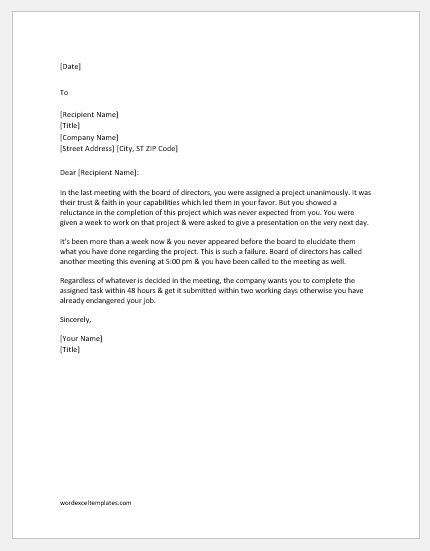 The rules and regulations of a country are framed in such a way that all citizens must follow them. Secondly, the government is obliged to set such a system that everyone is aware of his/her limitations. All the authorities enforce the laws in such a way that they are easy to be obeyed. Time-to-time reminder of laws and rules must be done by the government. Moreover, punishment must be given on failures to follow the orders. It creates a lesson for other individuals as to avoid committing crimes etc.

Once an individual is observed failing to follow the orders from the concerned authority, a warning is issued. The warning letter on failure to obey orders can be floated in many cases. These are: 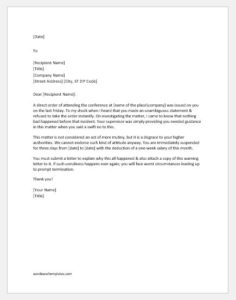 A direct order of attending the conference at [name of the place\company] was issued on you on the last Friday. To my shock when I heard that you made an unambiguous statement & refused to take the order instantly. On investigating the matter, I came to know that nothing bad happened before that incident. Your supervisor was simply providing you needed guidance in this matter when you said a swift no to this.

This matter is not considered an act of mere mutiny, but it is a disgrace to your higher authorities. We cannot endorse such kind of attitude anyway. You are immediately suspended for three days from [date] to [date] with the deduction of a one-week salary of this month.

You must submit a letter to explain why this all happened & also attach a copy of this warning letter to it. If such unruliness happens ever again; you will face worst circumstances leading up to prompt termination. 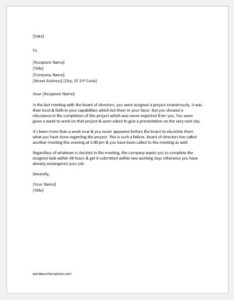 In the last meeting with the board of directors, you were assigned a project unanimously. It was their trust & faith in your capabilities which led them in your favor. But you showed a reluctance in the completion of this project which was never expected from you. You were given a week to work on that project & were asked to give a presentation on the very next day.

It’s been more than a week now & you never appeared before the board to elucidate them what you have done regarding the project. This is such a failure. Board of directors has called another meeting this evening at 5:00 pm & you have been called to the meeting as well.

Regardless of whatever is decided in the meeting, the company wants you to complete the assigned task within 48 hours & get it submitted within two working days otherwise you have already endangered your job.