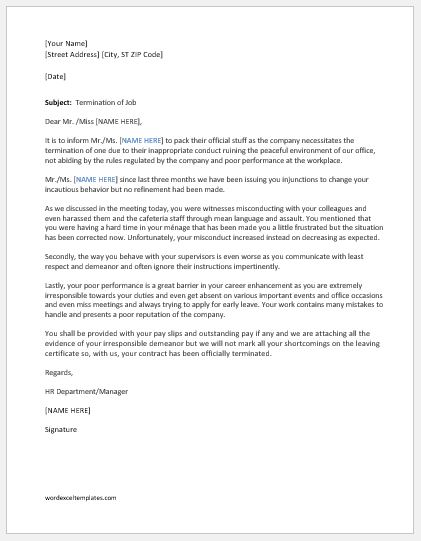 The termination of an employee goes in a progressive manner. The employee is warned several times about his misconduct. If he does not correct his misconduct, the employer then decides to terminate him.

The employer should meet the employee in person before issuing the termination letter. The main purpose of writing this letter is to inform the employee that his job has been ended because of fighting with his co-workers.

It should provide all the details that an employee needs to know as his job ends. The letter should also provide all the relevant shreds of evidence that are needed to keep as a proof that the employee was terminated because of a valid reason.

The main details that are added to a general termination letter are the details about the paycheck, the benefits and the reason for termination. Every organization has its own method to follow while drafting the termination letter. Here is a sample letter to help you in writing the letter of termination.

Termination letter for fighting at workplace

We are very sad to announce that we have decided to terminate you from the job. You have conducted a very serious fight with co-workers that have damaged the environment as well as the reputation of the company. We would like you to leave the job. We assure you that we will clear all your debts. 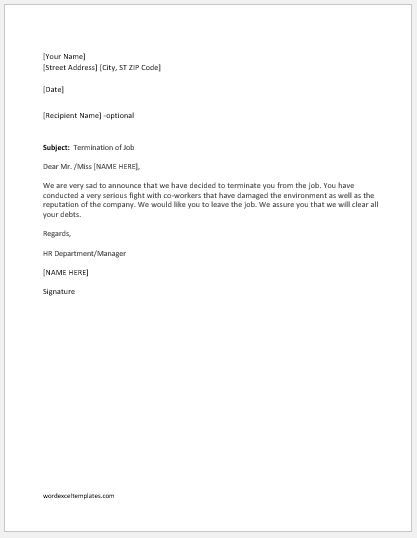 It is to inform Mr./Ms. [NAME HERE] to pack their official stuff as the company necessitates the termination of one due to their inappropriate conduct ruining the peaceful environment of our office, not abiding by the rules regulated by the company and poor performance at the workplace.

Mr./Ms. [NAME HERE] since last three months we have been issuing you injunctions to change your incautious behavior but no refinement had been made.

As we discussed in the meeting today, you were witnesses misconducting with your colleagues and even harassed them and the cafeteria staff through mean language and assault. You mentioned that you were having a hard time in your ménage that has been made you a little frustrated but the situation has been corrected now. Unfortunately, your misconduct increased instead on decreasing as expected.

Secondly, the way you behave with your supervisors is even worse as you communicate with least respect and demeanor and often ignore their instructions impertinently.

Lastly, your poor performance is a great barrier in your career enhancement as you are extremely irresponsible towards your duties and even get absent on various important events and office occasions and even miss meetings and always trying to apply for early leave. Your work contains many mistakes to handle and presents a poor reputation of the company.

You shall be provided with your pay slips and outstanding pay if any and we are attaching all the evidence of your irresponsible demeanor but we will not mark all your shortcomings on the leaving certificate so, with us, your contract has been officially terminated.