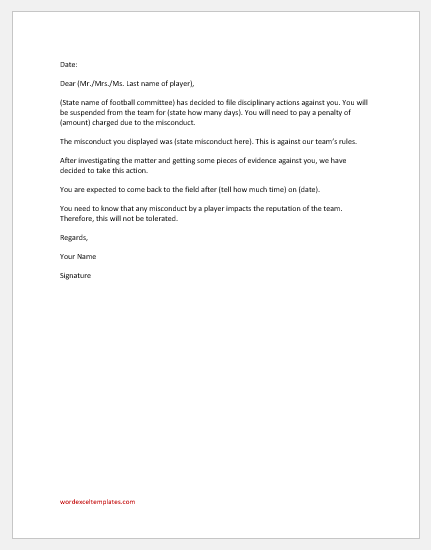 The concept of suspension has always been used to correct the behavior of people who don’t consider the codes of conduct. In many organizations, there are different steps taken to maintain discipline. When it comes to following the rules and policies of the organization, no one is given impunity. Players in the team are also expected to show compliance with the codes of conduct.

What is a suspension letter to the player for misconduct?

When a player shows misconduct of any type, the team management, referee, or the tournament’s executives can ban the players from playing a specific number of games. This is commonly known as suspension. When a suspension has been carried out and those responsible for suspension want the player to know about it, they write a letter to him.

In this letter, the player is told that he has been banned from playing games in the tournament. The type of suspension depends on the nature and intensity of the misconduct. If there is minor misconduct on the player’s part, a minor suspension can be expected.

When to write the suspension letter to the player for misconduct?

When a player shows an aggressive game on the ground or offends others in terms of handling the ball (in a football game), it can be considered as misconduct on his part and the decision of suspension can be taken. There are different policies the breach of which can never be tolerated. However, some players fail to show compliance with those policies and get involved in any foul act. In this case, writing a suspension letter is essential.

How to write a letter to adjourn a player?

Writing a letter to announce the adjournment is a challenging task since you are required to convince the reader that he has done something wrong and he deserves to be suspended for a while. Some players don’t seem to agree with it and they may take legal actions against those who adjourn them. Therefore, the letter should be written in such a way that the player fully understands the foul behavior he has exhibited and the penalty he must bear.

To help you write an effective letter of suspension, below is a step-by-step guide:

As you go about the letter, there is no need to show formalities since it Is not being written in a pleasant situation. Make a formal announcement to inform the player that he would not be able to play a specific number of games or the rest of the tournament.

This suspension should be made professionally and formally and it should not reflect that you have any type of grudge with the players and you are trying to take any kind of revenge from him.

In addition to it, your letter should also show that you are really unhappy to announce that. In the same part of the letter, tell the reader how offensive his misconduct is. Also, mention the starting and ending dates of the suspension.

Bring up the reason:

After you have made the announcement, it is the right time for you to let the player know what compelled you to take that decision. Provide the reason to the player. Make him know that he was expected to follow codes of conduct as he represents his team and state. But since he has not followed those codes, he deserves to be penalized.

When you define the reason for the postponement of the player’s game, refer to the contract he has signed and agreed with the terms that also show that the player must show compliance with rules.

Tell him how the decision has been taken:

After reading about the postponement of his game, the player might want to know who has taken this decision. So, inform the player about the authorities involved in this decision and the kind of investigation and inquiries that have been conducted to ensure that the fair suspension is carried out. This will let the player know that he has been fairly treated.

Tell what you expect:

Discuss your expectations from the player when he returns to the ground.

(State name of football committee) has decided to file disciplinary actions against you. You will be suspended from the team for (state how many days). You will need to pay a penalty of (amount) charged due to the misconduct.

The misconduct you displayed was (state misconduct here). This is against our team’s rules.

After investigating the matter and getting some pieces of evidence against you, we have decided to take this action.

You are expected to come back to the field after (tell how much time) on (date).

You need to know that any misconduct by a player impacts the reputation of the team. Therefore, this will not be tolerated.