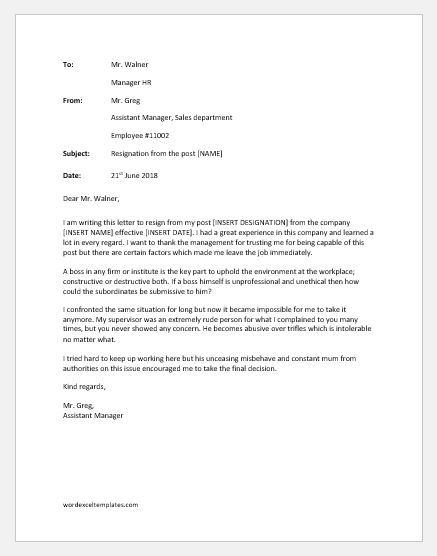 Any unsatisfactory situation at the workplace can direct to a resignation. These unsatisfactory conditions are those that are unable to cope with. They are simply very difficult to resolve. But, most employees try numerous ways out to deal with or manage. But, when they fail to do so and things are getting up on the nerves, there is the best possible solution to resign. As mind console is not more than anything in the world.

The letter is a formal document written by an employee when s/he feels that the boss is unprofessional or incapable of dealing with official matters. For some employees working under such a boss is stressful as well as unfruitful in the end. Also, it may put one’s career in danger too.

The office environment needs to be much professional and civilized. A carefree attitude of higher authorities misguides all the employees. Their diligence level is demoralized. Additionally, willingness to become creative just wipes away. Moreover, such an environment cannot be compromised in any way. When bosses are unprofessional, employees put a resign.

In the following situations, one can put a resign due to the unprofessional boss.

The template is attached here.

I am writing this letter to resign from my post [INSERT DESIGNATION] from the company [INSERT NAME] effective [INSERT DATE]. I had a great experience in this company and learned a lot in every regard. I want to thank the management for trusting me for being capable of this post but there are certain factors which made me leave the job immediately.

A boss in any firm or institute is the key part to uphold the environment at the workplace; constructive or destructive both. If a boss himself is unprofessional and unethical then how could the subordinates be submissive to him?

I confronted the same situation for long but now it became impossible for me to take it anymore. My supervisor was an extremely rude person for what I complained to you many times, but you never showed any concern. He becomes abusive over trifles which is intolerable no matter what.

I tried hard to keep up working here but his unceasing misbehave and constant mum from authorities on this issue encouraged me to take the final decision.