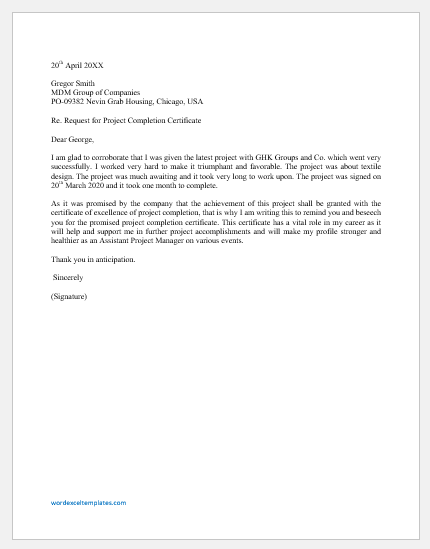 This letter aims to request for a certificate to be granted after the completion of a project. When a project is completed, the project manager can write formally to the employer individually or the organization. The letter primarily focuses on the project completion and then on the right of the employee for a promised certificate.

An employee makes the request by informing the employer or organization that the project has been completed successfully with all the prerequisites and conditions. The writer can also propose further queries regarding project completion for satisfaction. The writer can also make his request by telling the employer about the significance of this certificate and what role this certificate can play in his career.

Writing formally this way goes in the favor of the writer as the made request is recorded in the official records of the organization. Another benefit of writing this letter is that the employer can make all the official procedures and evaluations based on this writing.

Speaking for official purposes or making request orally has less effect as compared to writing officially. The writer has to keep pace in his writing by making the realization or a reminder of his right in an official and amicable way of narration.

One has to keep in mind to stay formal and not rigid throughout his writing. The employee shall ask for the certificate only when the project has been completed successfully. The rights for an uncompleted project are contravened and thus, the request has no effect for the certificate vouchsafe.

The following is a sample letter for Project Completion Certificate.

Re. Request for Project Completion Certificate

As it was promised by the company that the achievement of this project shall be granted with the certificate of excellence of project completion, that is why I am writing this to remind you and beseech you for the promised project completion certificate. This certificate has a vital role in my career as it will help and support me in further project accomplishments and will make my profile stronger and healthier as an Assistant Project Manager on various events.
Thank you in anticipation.