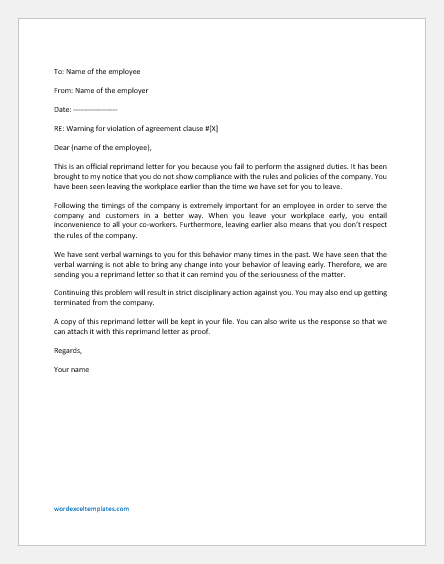 What is a reprimand letter?

A reprimand letter is a document that is sent by an employer to his employees when they don’t perform well. It is a type of warning letter that is used to make the employee correct his behavior.

Why reprimand letter for leaving early is written?

Some employees make a mistake of leaving the office early without asking anyone for this. This type of behavior of the employee shows that the employee does not take his job seriously. It also shows that an employee is an irresponsible person who does not value time.

One of the biggest purposes of writing this letter is to make the employee aware of the fact that leaving early is not professional behavior and the employer never approves this non-seriousness.

What information does a reprimand letter convey?

A reprimand letter is considered as a very useful document for those employers who are sick of their employees’ behavior who don’t seem to correct their behavior. Through this letter, the employer conveys lots of important details such as:

This is a sample letter being written to an employee who leaves the office early without taking permission.

To: Name of the employee

From: Name of the employer

RE: Warning for violation of agreement clause #[X]

Dear (name of the employee),

This is an official reprimand letter for you because you fail to perform the assigned duties. It has been brought to my notice that you do not show compliance with the rules and policies of the company. You have been seen leaving the workplace earlier than the time we have set for you to leave.

Following the timings of the company is extremely important for an employee in order to serve the company and customers in a better way. When you leave your workplace early, you entail inconvenience to all your co-workers. Furthermore, leaving earlier also means that you don’t respect the rules of the company.

We have sent verbal warnings to you for this behavior many times in the past. We have seen that the verbal warning is not able to bring any change into your behavior of leaving early. Therefore, we are sending you a reprimand letter so that it can remind you of the seriousness of the matter.

Continuing this problem will result in strict disciplinary action against you. You may also end up getting terminated from the company.