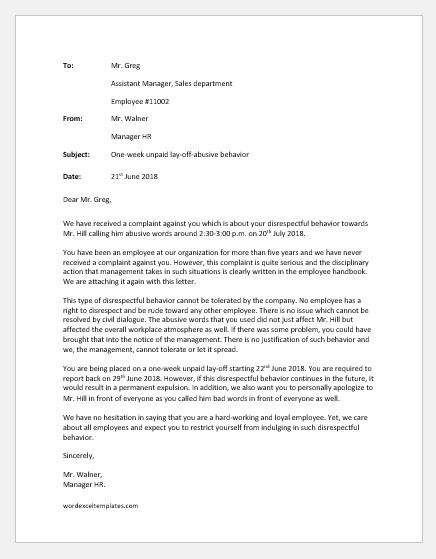 In the workplace, respect is a basic right of every individual. This is why a disrespectful behavior is not tolerated by organizations as they have to make sure of the provision of basic rights to their employees. However, employees often indulge themselves in behavior which is not acceptable and hence gets reprimanded.

The organizations usually have very strict policies against disrespectful behavior which are printed in the employee book. However, when an employee is in a situation where he cannot control the circumstances, s/he usually forgets about the correct demeanor and the management has to take some disciplinary action against him.

When humans are working together, rifts arise. How these issues are settled and dealt with is very important to maintain the good and friendly environment in the workplace. Sometimes, some employees indulge in fights or abusive remarks because they are facing some family issues and they are unable to properly manage both work and family problems resulting in disrespecting their colleagues.

At the same time, some employees are just rude because they have less tolerance for unfavorable circumstances.

This incivility affects employee morale and creates a toxic working environment. The other major problem with disrespectful behavior is if it is not dealt with properly it spreads like fire.

The hesitation to be rude fades away and everyone becomes disrespectful resulting in an unimaginable and unbearable environment. Therefore, it is very important for the management to take proper and strict actions to show their disagreement rather disapproval of such behavior.

We have received a complaint against you which is about your disrespectful behavior towards Mr. Hill calling him abusive words around 2:30-3:00 p.m. on 20th July 2018.

You have been an employee at our organization for more than five years and we have never received a complaint against you. However, this complaint is quite serious and the disciplinary action that management takes in such situations is clearly written in the employee handbook. We are attaching it again with this letter.

This type of disrespectful behavior cannot be tolerated by the company. No employee has a right to disrespect and be rude toward any other employee. There is no issue which cannot be resolved by civil dialogue. The abusive words that you used did not just affect Mr. Hill but affected the overall workplace atmosphere as well. If there was some problem, you could have brought that into the notice of the management. There is no justification of such behavior and we, the management, cannot tolerate or let it spread.

You are being placed on a one-week unpaid lay-off starting 22nd June 2018. You are required to report back on 29th June 2018. However, if this disrespectful behavior continues in the future, it would result in a permanent expulsion. In addition, we also want you to personally apologize to Mr. Hill in front of everyone as you called him bad words in front of everyone as well.

We have no hesitation in saying that you are a hard-working and loyal employee. Yet, we care about all employees and expect you to restrict yourself from indulging in such disrespectful behavior.