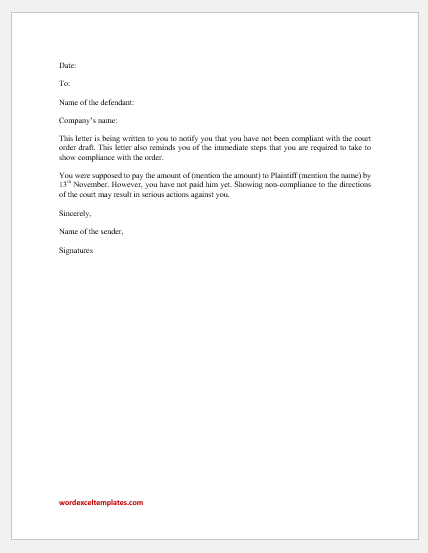 The order of the court is generally given by the judge and it has a lot of significance in the world. After the court hearing and completion of the court order, the judge asks one of the lawyers of both parties to bring the order into writing. This written order is known as a court order draft.

What is a non-compliance letter with a court order draft?

Who sends the letter of non-compliance?

In general, the court sends this letter to one of the defendants who don’t follow the court order draft. However, in some cases, one party can also write this letter to another rival party just to remind them to not show non-compliance.

When to write the non-compliance letter?

When someone has already been directed by the court through its verdict to follow the rule of equal rights for everyone in an educational institution and then they have been seen violating this glaringly, the court can write them the non-compliance letter.

When there is a dispute between two parties on any matter and one party is required to act in a certain way and does not take the court’s order seriously, the court writes to that party and reminds it of respecting the jurisdiction of the court.

If you have to write this non-compliance letter on behalf of the court and you don’t know how to draft a professional and accurately communicated letter, you can follow the tips given below:

This letter can be written in a slightly different format as compared to other letters as it reflects the communication between the defendant and the court. Apart from the format, gather enough information about the technical terms to be used in such letters.

At the top of the letter, the defendant is addressed by name and designation in the company.

Add the subject that will let the reader know upfront about the content of the letter.

Mention the purpose of the letter:

Sometimes, the reader fails to understand why he has been written the non-compliance letter. Therefore, it is important to tell the reason for writing the letter in the beginning. While stating the reason, refer to the court order draft that was issued by the court and also mention the date on which the recipient or his lawyer received it.

Any person who does not follow the rules and orders of the court has to face the consequences of his action. You must explain consequences to the recipient that are also mentioned in the court order draft on showing non-compliance.

At the end of the letter, you can ask the recipient once again to show compliance with the order of the judge. For instance, if you want them to clear the payment, you can professional ask them to pay as per court orders or be ready to face the music.

Name of the defendant:

This letter is being written to you to notify you that you have not been compliant with the court order draft. This letter also reminds you of the immediate steps that you are required to take to show compliance with the order.

You were supposed to pay the amount of (mention the amount) to Plaintiff (mention the name) by 13th November. However, you have not paid him yet. Showing non-compliance to the directions of the court may result in serious actions against you.

Name of the sender,