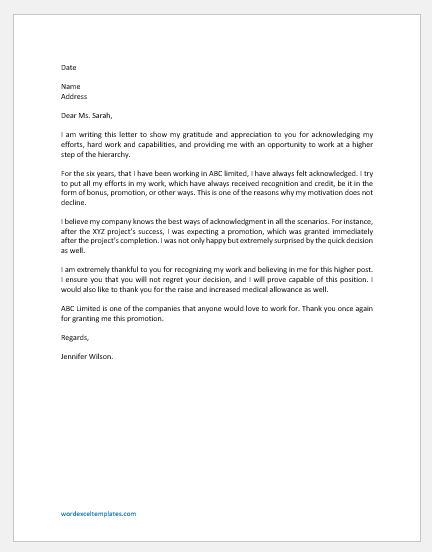 What is a gratitude and appreciation letter?

When an employee is putting in hard work, he feels the need to get appreciation and acknowledgment. One of the ways the organizations chose for doing this is by granting a promotion up the hierarchy to the employee. In response to that, the employee also feels the need to write a formal letter to show his thankfulness, as well as appreciate the company for the recognition. It is important to express to the company that the employee is not only joyous at the promotion but is also happy to be a part of the company.

When the employee writes the letter of gratitude and appreciation for promotion, the details and length may vary depending on the employee’s priorities or the overall scenario. However, the general details included in such letters are:

Orally and informally, an employee may extend gratitude to his employer or supervisor several times. However, the written letter holds different importance in the eyes of the employer. The organization also likes to be aware of its worth for its employees, and this letter is a great source of knowledge about an employee’s appreciation. In addition, it is also kept in the records, which can show the employee’s courtesy and professionalism.

I am writing this letter to show my gratitude and appreciation to you for acknowledging my efforts, hard work and capabilities, and providing me with an opportunity to work at a higher step of the hierarchy.

For the six years, that I have been working in ABC limited, I have always felt acknowledged. I try to put all my efforts in my work, which have always received recognition and credit, be it in the form of bonus, promotion, or other ways. This is one of the reasons why my motivation does not decline.

I believe my company knows the best ways of acknowledgment in all the scenarios. For instance, after the XYZ project’s success, I was expecting a promotion, which was granted immediately after the project’s completion. I was not only happy but extremely surprised by the quick decision as well.

I am extremely thankful to you for recognizing my work and believing in me for this higher post. I ensure you that you will not regret your decision, and I will prove capable of this position. I would also like to thank you for the raise and increased medical allowance as well.

ABC Limited is one of the companies that anyone would love to work for. Thank you once again for granting me this promotion.