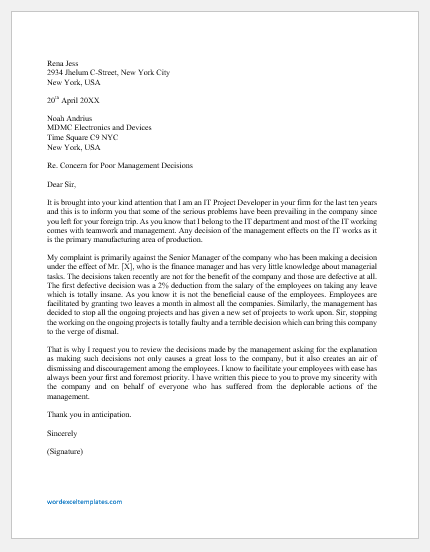 The following sample letter is written by an IT Project Developer to the director informing the defective and faulty decisions made by the management of the company and its effect.

Re. Concern for Poor Management Decisions

It is brought into your kind attention that I am an IT Project Developer in your firm for the last ten years and this is to inform you that some of the serious problems have been prevailing in the company since you left for your foreign trip. As you know that I belong to the IT department and most of the IT working comes with teamwork and management. Any decision of the management effects on the IT works as it is the primary manufacturing area of production.

My complaint is primarily against the Senior Manager of the company who has been making a decision under the effect of Mr. [X], who is the finance manager and has very little knowledge about managerial tasks. The decisions taken recently are not for the benefit of the company and those are defective at all. The first defective decision was a 2% deduction from the salary of the employees on taking any leave which is totally insane. As you know it is not the beneficial cause of the employees. Employees are facilitated by granting two leaves a month in almost all the companies. Similarly, the management has decided to stop all the ongoing projects and has given a new set of projects to work upon. Sir, stopping the working on the ongoing projects is totally faulty and a terrible decision which can bring this company to the verge of dismal.

That is why I request you to review the decisions made by the management asking for the explanation as making such decisions not only causes a great loss to the company, but it also creates an air of dismissing and discouragement among the employees. I know to facilitate your employees with ease has always been your first and foremost priority. I have written this piece to you to prove my sincerity with the company and on behalf of everyone who has suffered from the deplorable actions of the management.

Thank you in anticipation.