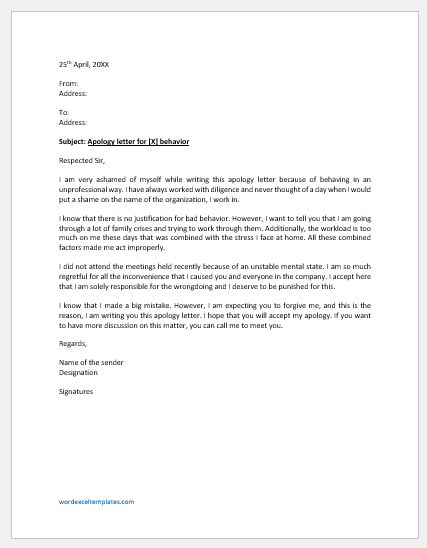 What is an apology letter?

It is a type of piece of writing that someone writes to express the feeling of regret based on something that happened in the past due to carelessness or negligence of the person. In the professional world, people are expected to behave in a certain way. They are told the code of conduct that they must follow. It makes them look professional and their behavior is regarded as professional behavior. So, when someone does not behave professionally, they should regret and apologize.

Why is an apology letter important?

Unprofessional behavior causes inconvenience to people in several ways always. For example, when an employee behaves improperly by coming to work late, he causes inconvenience to all those people who work around him and depend on him to start his work and collaborate. In this situation, people usually get annoyed. Employers don’t want this to happen in their company. Therefore, they feel it to be very important to admonish the employee who does not act professionally. In this situation, when an employee writes an apology letter, he attempts to appease the situation.

People express their regretful feelings because they feel that this is the only way they can keep the serious consequences of showing unprofessional behavior at bay. However, most people don’t pull off. This happens because people generally make the following mistakes:

What are the basic components of the apology letter?

To draft a better letter, you need to consider the following items:

There should be a straight and blunt statement about your act of owning the mistake. State that no one holds the responsibility for this mistake but you.

Although you have accepted a mistake, you should tell that why you made that mistake in the first place.

Admitting the mistake is all your employer wants sometimes. Do it right away and make things become better with time.

I am very ashamed of myself while writing this apology letter because of behaving in an unprofessional way. I have always worked with diligence and never thought of a day when I would put a shame on the name of the organization, I work in.

I know that there is no justification for bad behavior. However, I want to tell you that I am going through a lot of family crises and trying to work through them. Additionally, the workload is too much on me these days that was combined with the stress I face at home. All these combined factors made me act improperly.

I did not attend the meetings held recently because of an unstable mental state. I am so much regretful for all the inconvenience that I caused you and everyone in the company. I accept here that I am solely responsible for the wrongdoing and I deserve to be punished for this.

I know that I made a big mistake. However, I am expecting you to forgive me and this is the reason, I am writing you this apology letter. I hope that you will accept my apology. If you want to have more discussion on this matter, you can call me to meet you.

Name of the sender
Designation