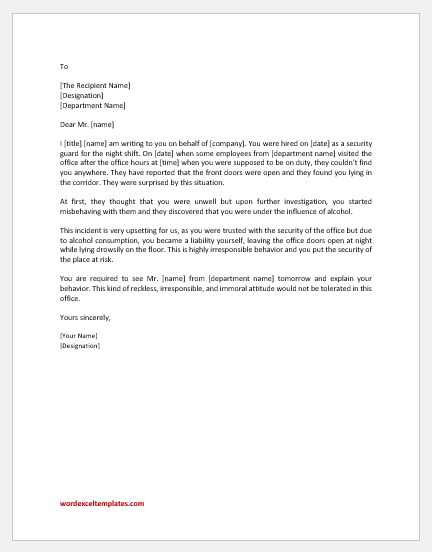 Drinking alcohol has a serious effect on the mind of the person and he cannot perform his duties well. Therefore, it is strictly forbidden to drink alcohol while being on duty. Whenever any person is seen showing indiscipline at the workplace, strict actions can be taken against that person.

What is an explanation letter for drinking alcohol?

When an employee is caught drinking alcohol at the time of duty, he is taken to task by his employer. In most situations, search employees are immediately fired from their work. However, their boss asks them to write an explanation letter to clear their position as it is the basic right of a person employed in a company.

What does a letter of explanation do?

Things to include in the explanation letter:

Rather, it should also include a statement of apology so that the employer can know that you are sorry for whatever you have done deliberately or unintentionally. A typical explanation letter written in the event of getting caught drinking while being in the workplace should include the following details:

Although your employer knows what has happened, he does not know your side of the story and therefore, you are recommended to come up with it. Try to give a clear picture of the entire incidence.

Don’t escape from accepting the reality and focus on yourself and your part in the entire situation. Even if your mistake was obvious and you know that you have been seen drinking by people and there is no denying that, just make your boss feel that at least you know that what you have done was wrong.

The second part of the letter should include the expression of the regret that you are feeling upon committing the mistake of not taking care of the rules of the company. When you express regret, make sure that you make your boss feel that you are aware of the fact that drinking when on duty is wrong and you should have never done that.

Ensure that will not repeat the mistake:

Expressing regret has no meaning unless you are committed to not repeating the mistake. For an employer, the expression of regret is nothing and he expects you to commit that you are not going to drink alcohol at work you will never come to work drunk. Make your employer believe that you will never repeat the mistake.

Any person who accepts his mistake should be ready to repair the situation. When your boss sees that you are ready to correct the mistake, it shows that you are seriously embarrassed, and this convinces him to forgive you to some extent.

Mistakes to avoid in an explanation letter:

I [title] [name] am writing to you on behalf of [company]. You were hired on [date] as a security guard for the night shift. On [date] when some employees from [department name] visited the office after the office hours at [time] when you were supposed to be on duty, they couldn’t find you anywhere. They have reported that the front doors were open and they found you lying in the corridor. They were surprised by this situation.

At first, they thought that you were unwell but upon further investigation, you started misbehaving with them and they discovered that you were under the influence of alcohol.

This incident is very upsetting for us, as you were trusted with the security of the office but due to alcohol consumption, you became a liability yourself, leaving the office doors open at night while lying drowsily on the floor. This is highly irresponsible behavior and you put the security of the place at risk.

You are required to see Mr. [name] from [department name] tomorrow and give an explanation of your behavior. This kind of reckless, irresponsible, and immoral attitude would not be tolerated in this office.