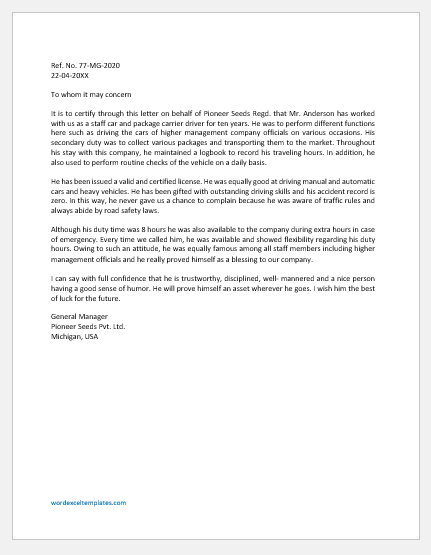 This experience certificate is being written to certify that Mr. Evelyn has been working as a driver in Nestle (USA) for the last five years from 1st July 20XX to 30th June 20XX. We have found him proficient in his work. He has been gifted with all the abilities so as to be called as a professional driver. He is well versed with driving techniques and an efficient driver of both LTV and HTV including light commuter and heavy loaders. He drives in a safe way and follows all road safety rules. I never observed him breaching the traffic law while driving.

He is trustworthy, well-mannered, and has a valid traffic license. Apart from being a driver, he could also do the washing, alignment, and maintenance of the vehicle by himself. So, there is no exaggeration in saying that he is punctual, disciplined, and trustworthy. He had never given us any chance of complaint.

He showed flexibility in duty hours and was agreeing to work during the morning, evening, and night shifts whatever needed from him. His duty time was 8 hours but he was also available during extra hours whenever we asked. In short, such a groomed and seasoned driver is a blessing and a gift to any organization. We wish him the best of luck for his future. 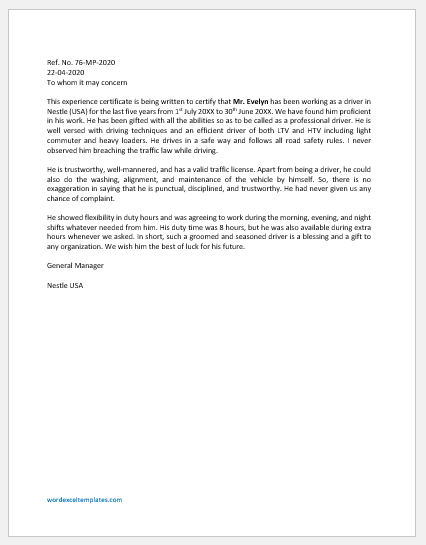 It is to certify through this letter on behalf of Pioneer Seeds Regd. that Mr. Anderson has worked with us as a staff car and package carrier driver for ten years. He was to perform different functions here such as driving the cars of higher management company officials on various occasions. His secondary duty was to collect various packages and transporting them to the market. Throughout his stay with this company, he maintained a logbook to record his traveling hours. In addition, he also used to perform routine checks of the vehicle on a daily basis.

He has been issued a valid and certified license. He was equally good at driving manual and automatic cars and heavy vehicles. He has been gifted with outstanding driving skills and his accident record is zero. In this way, he never gave us a chance to complain because he was well aware of traffic rules and always abide by road safety laws.

Although his duty time was 8 hours he was also available to the company during extra hours in case of emergency. Every time we called him, he was available and showed flexibility regarding his duty hours. Owing to such an attitude, he was equally famous among all staff members including higher management officials and he really proved himself as a blessing to our company.

I can say with full confidence that he is trustworthy, disciplined, well- mannered and a nice person having a good sense of humor. He will prove himself an asset wherever he goes. I wish him the best of luck for the future.