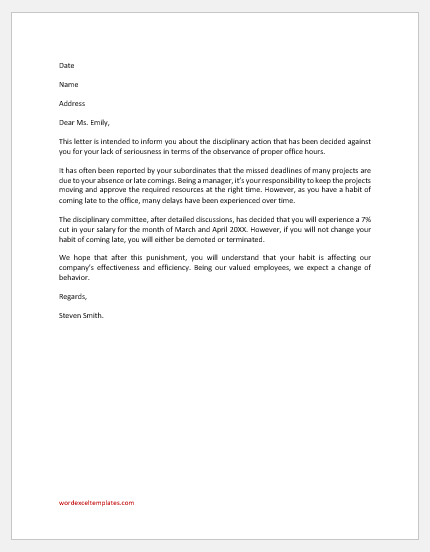 The observance of the proper office hours, protocols, rules, etc., is important for the maintenance of decorum and discipline in an organization. When the employees fail to do that, they affect the overall performance, effectiveness, and efficiency of the company.

If an employee is coming late in the office or in the meetings, he is affecting the overall timing and work, especially of the subordinates whose work is directly dependent on him. Therefore, the companies cannot ignore or overlook such behavior. Unless and until the matter is not severe, usually, the company first issues warnings. However, if the warnings do not resolve the issue, they are followed by disciplinary action.

While creating a disciplinary committee, it is tried that the committee has a minimal bias. After considering various factors and the severity of the issue, the committee decides about the correct disciplinary action to be taken. It is often considered that the decided step should not only be a punishment but also should push the employee to avoid such behavior in the future. In addition, the action should be a lesson for other employees as well, so that they would avoid indulging in such sort of behavior of late coming.

The employee is informed through a disciplinary action letter about the committee’s decision. This letter can have varying details, depending on the company requirements and the situation severity. However, the general template of such letters includes the following information:

Employees should know that they cannot be casual about the office hours, and that late comings can make them face some serious consequences. As this letter is kept in the record, affects the employee reputation, and can be used for any reference in the future, often, the late coming behavior of the employees gets changed after receiving the warnings, as they to avoid such disciplinary action letters. However, if the behavior continues, the disciplinary action is unavoidable.

This letter is intended to inform you about the disciplinary action that has been decided against you for your lack of seriousness in terms of the observance of proper office hours.

It has often been reported by your subordinates that the missed deadlines of many projects are due to your absence or late comings. Being a manager, it’s your responsibility to keep the projects moving and approve the required resources at the right time. However, as you have a habit of coming late to the office, many delays have been experienced over time.

The disciplinary committee, after detailed discussions, has decided that you will experience a 7% cut in your salary for the month of March and April 20XX. However, if you will not change your habit of coming late, you will either be demoted or terminated.

We hope that after this punishment, you will understand that your habit is affecting our company’s effectiveness and efficiency. Being our valued employees, we expect a change of behavior.