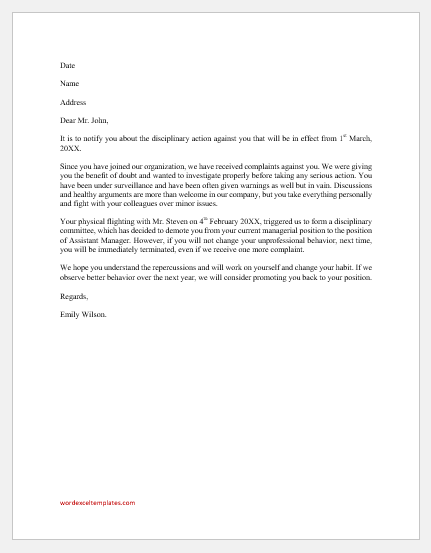 A disciplinary action letter for fighting is a letter that is written by an employer of an organization, in which he addresses his employee, and notifies him about the step that will be taken against him, as per the disciplinary committee, for the act of fighting he was engaged in.

There is a decorum of an organization, which needs to be maintained by all the employees by exhibiting acceptable and professional behavior. Otherwise, the organization is forced to take some action against the guilty employee. Nevertheless, the employees still indulge in various sorts of unprofessional behaviors, one of which is fighting, which often brings an employee in front of a disciplinary committee.

Whether physical or not, fighting is not tolerable to an organization, as it can cause various issues among the employees and for the organization.

Depending on the severity of the situation and the company requirements, the information is chosen to be included in the letter. Usually, the company designs a template or uses a ready-made one, and edits it, so to save time and conform to the uniformity in the official documents. The general details included in a disciplinary action letter for fighting are:

When an employee receives a disciplinary action letter, or if any disciplinary action is taken against him, not only his reputation gets affected, but his evaluation and any future promotions become subject to consideration for the employer as well. Therefore, employees often struggle to rectify their behavior, so that any such letter is not issued to them, which can affect their record for many years to come.

However, if one employee gets punished for being involved in the fighting of any sort, it becomes a lesson for the other employees as well, so that they would try to avoid such unprofessional behavior as well.

It is to notify you about the disciplinary action against you that will be in effect from 1st March, 20XX.

Since you have joined our organization, we have received complaints against you. We were giving you the benefit of doubt and wanted to investigate properly before taking any serious action. You have been under surveillance and have been often given warnings as well but in vain. Discussions and healthy arguments are more than welcome in our company, but you take everything personally and fight with your colleagues over minor issues.

Your physical flighting with Mr. Steven on 4th February 20XX, triggered us to form a disciplinary committee, which has decided to demote you from your current managerial position to the position of Assistant Manager. However, if you will not change your unprofessional behavior, next time, you will be immediately terminated, even if we receive one more complaint.

We hope you understand the repercussions and will work on yourself, and change your habit. If we observe better behavior over the next year, we will consider promoting you back to your position.