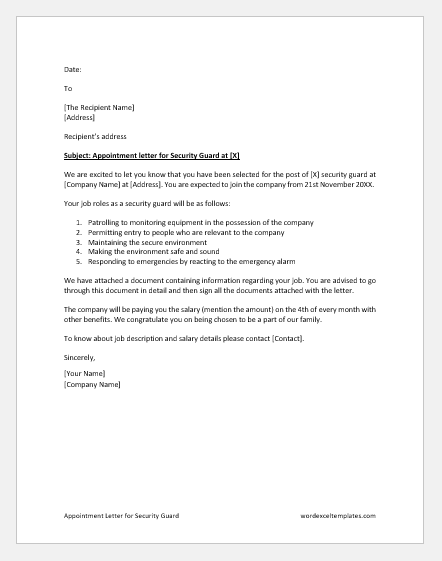 What is an appointment letter?

How important an employment letter is?

People who apply for a particular job position often wait for the employment letter because it is a clear message from the recruiter that the recipient has been selected by the company.

When is the employment letter sent?

Whenever a company chooses someone and finds them to be appropriate for the position of a security guard, it writes them a letter and lets them know that they have become an active member of that company. Generally, this letter is sent after the company has sent the offer letter and the candidate has accepted it.

Who writes the employment letter to the security guard?

A person who is deemed perfect for the post of guard receives this letter from the HR of the company as he is the person responsible for recruiting people and informing them about their recruitment. In some cases, the employer himself also writes this letter.

How to write to inform the potential security guard about his hiring?

Following are some guidelines that can be followed for writing a letter while designating someone with the responsibility of a security person:

Inform the reader about his designation with necessary details:

Let the reader know about his designation by mentioning the post on which he has been chosen, the date from which he is expected to start working in the company, and much more.

The recipient should be aware of his duties as and when he joins the company so that he does not go into any kind of dispute regarding the job role. It is better to enlist the role of the recipient in this designation letter with his job timings.

The main focus of the candidate when he receives the appointment letter for a security guard is on the salary. Therefore, you must mention the salary along with details of the bonus and other incentives. If he is going to get free accommodation or any such benefits, don’t forget to mention them too in the letter.

Below is a sample appointment letter written to the person who has been appointed and now he is being informed so that he starts preparing himself for the job.

We are excited to let you know that you have been selected for the post of [X] security guard at [Company Name] at [Address]. You are expected to join the company from 21st November 20XX.

Your job roles as a security guard will be as follows:

We have attached a document containing information regarding your job. You are advised to go through this document in detail and then sign all the documents attached with the letter.

The company will be paying you the salary (mention the amount) on the 4th of every month with other benefits. We congratulate you on being chosen to be a part of our family.